On 22 April 2008, GLOBE students, teachers and community members around the world celebrated Earth Day. The first Earth Day was celebrated on 22 April 1970. Now, almost thirty years later, more than 500 million people living in 175 countries observe this day dedicated to galvanizing efforts to mobilize people, governments, and corporations to take responsibility for a clean and healthy environment. Many GLOBE students and teachers celebrated Earth Day by responding to the request of the GLOBE Program Office (GPO) to submit video clips and Powerpoint presentations about their local environments. Mini-documentaries from GLOBE students in Cameroon, Croatia, Germany, Uganda and the United States can be viewed on the GLOBE Earth Day Web page. 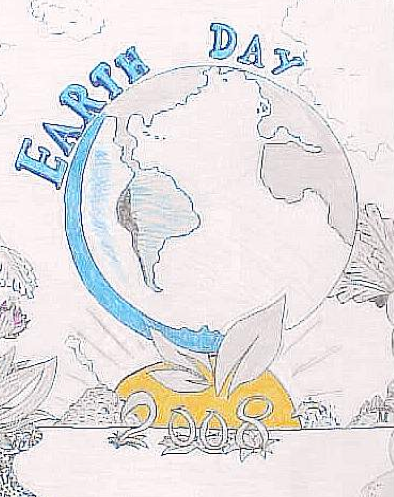 Earth Day holds special significance for GLOBE because GLOBE began operations on Earth Day 1995. In effect, Earth Day is GLOBE's birthday! In addition to the mini-documentaries sent to the GPO, several schools sent written reports about how they observed Earth Day 2008. Here are some of their stories.

During Earth Week celebrations in Lebanon, from 20 -- 25 April, students at the American Community School in Beirut met with local agriculture producers. Souk El Tayeb, a local cooperative composed of local organic producers and women who use their organic products to make traditional Lebanese food, went to the school to promote traditional Lebanese culture and to educate students about ways they can connect with their heritage and their environment through healthy food and living. After this, the students planted native trees at a local university. The students have been inspired to start a public awareness campaign on the importance of supporting local organic agriculture. In accordance with this campaign, the school has initiated a program to collaborate with local elementary and middle and high school schools to compost organic wastes that can be used to fertilize local produce.

In Bahrain, the U.S. Embassy sponsored an Earth Day Contest where primary, secondary and intermediate GLOBE students were encouraged to submit science projects. Each age group was given a different theme and encouraged to use various mediums to depict their local environments. Students between the ages of 9 and 18 had the option of doing an artistic project with the theme: "Describe the environmental changes in the inhabitant attitudes." Students between the ages of 15 and 18 submitted films, incorporating themes such as global warming, life in the sea, local plants, or local birds. A playwriting contest was held to demonstrate a third theme: "Our environment between the past and the future" for students between the ages of 13 and 18. In addition, 40 students of all ages participated in the event by creating paintings that represented the nature and culture of Bahrain. This was a great opportunity for students to come together and celebrate their environment through art and science.

In Finland, GLOBE Teacher Timo Peuraniemi and his students at the Lintumetsä School in Espoo spent the day cleaning the forest near the school. Afterwards, they returned to the classroom to make posters about Earth Day and to write an article about Earth Day for Finnish Wikipedia. One of the students commented, "After the school day I told my parents about Earth Day. They had never heard of it. From now on, we are going to celebrate it every year."

In Niger, schools celebrated "World Meteorological Day" on 23 March. GLOBE teachers collaborated with "Niger's Direction Nationale de la Meteo" to take 70 students from six local schools to the national weather station at the airport. There, the students learned and observed how scientists take national temperature and rainfall measurements, create weather- front maps, and launch weather balloons. Students also gave presentations, sharing with each other how their schools participate in GLOBE. At the end of the day, the students had the opportunity to watch meteorologists at the local television station record the evening weather report.

The GLOBE Program Office would like to thank all teachers and students who responded to our request for information about how Earth Day was celebrated in your communities. The GPO would also like to commend everyone who celebrated Earth Day and demonstrated active participation in local community efforts to celebrate and protect the Earth!