On a sunny Saturday in January, sixteen high school students gathered in a wooded area behind the campus of the University of Southern Maine. Lead by two foresters from the Maine Forest Service, these young men and women were on their first field exploration using GLOBE protocols as part of The Eastern Alliance for Science Technology, Engineering, and Mathematics (EAST) Field Science Institute. EAST promotes the participation of individuals with disabilities in science, technology, engineering, and mathematics academic programs and careers through funding from the U.S. National Science Foundation. EAST works in Maine, New Hampshire, Vermont, Massachusetts, and Rhode Island. 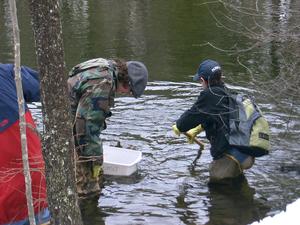 Between January and June, 2008, students attended monthly Field Science Institute sessions, each lead by a scientist from a different discipline, to collect and analyze data in field settings; learn what it means to "do" science; and envision themselves becoming scientists. Over the course of the sessions, students were introduced to soil science, forestry growth plots, environmental assessment, water ecology, animal behavior and plant ecology. They analyzed environmental issues, using tools such as clinometers to measure tree height and D-Nets for collecting aquatic invertebrates. Students characterized soil profiles using GLOBE's Soil Characterization protocol and then analyzed soil samples they had brought from home using GLOBE's Soil pH and Soil Fertility protocols. To modify the protocols, the students used Vernier Lab Quest units and pH probes instead of the more traditional pH meter. In addition to the GLOBE curriculum, the scientists and students used Project Learning Tree curriculum , and evaluated both of the programs on their accessibility to students with disabilities. Improving the accessibility of scientific inquiry is critically important to these students with disabilities. For many of the participants, this was their first experience actively participating in hands- on science and the first time they were encouraged to consider a career in science. 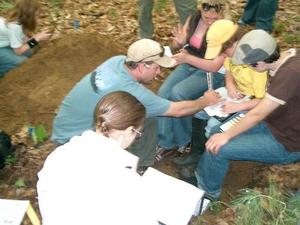 High school students with disabilities face many hurdles with careers in science, technology, engineering or math (STEM). Inadequate curriculum in high schools for students with disabilities can be a significant barrier in attaining higher education and expanding career options. Remedies for these risks and potential outcomes include a rich curriculum that involves hands-on, authentic scientific exploration; use of discipline specific tools and protocols. Evan, a participating freshman with Asperger's Syndrome, confirmed the importance of real-world science by saying, "I liked that we got to do things instead of just listening to the ideas. It was a great experience to have fun while you learn things." 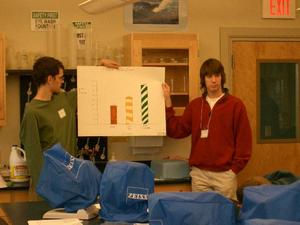 Students with disabilities need guidance and support to gain self-knowledge, self-advocacy skills and plan for the transition to college and careers. During the institute, the students worked with transition facilitators who helped them articulate their interest in science and consider the steps it would take to go to college, choose a major, and become a scientist. Kathleen, a junior with learning disabilities, found the combined focus on science and transition useful and said, "You might discover something you might want to do when you get to college." Megan agreed that the institute opened up possibilities, "It was a great way to see what else you can do for a job when you get out of high school."
16 July 2008