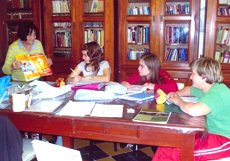 The 36th Buenos Aires International Book Fair took place 22 April-10 May 2010 at La Rural Exhibition Center in Buenos Aires, Argentina. The fair is considered one of the most important cultural events in Latin America and is one of the largest expositions in the Spanish-speaking world. This event serves as a place for both entertainment and exchange of knowledge between authors, scientists, students, and various other international and local intellectuals. The Book Fair is open to the public for a small fee and hosts lectures and activities of interest to all ages. This year activities included a book reading marathon, the International Poetry Festival, and free courses and workshops for patrons of all kinds. 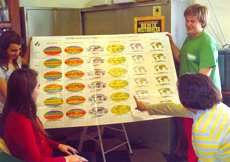 In an area designated for younger guests entitled, "Youth Space 2010-Caring for Our Planet," GLOBE was represented in Buenos Aires by students from two schools of Pujato: "Our Lady of Carmen" Primary School and "John F. Kennedy" Secondary School. These GLOBE schools have extensive research underway. Students shared a PowerPoint presentation and spoke to peers about their current projects. GLOBE Professor Claudia Romagnoli states that "although the students in Pujato (Santa Fe) participate in multiple science fairs in Argentina, being a part of the International Book Fair is an important accomplishment. Students were able to present their work on climate change and reforestation," thus giving exposure to the GLOBE program and educating both children and adults about the environment. Romagnoli is a Professor of Mathematical Physics and Cosmography and works alongside GLOBE teachers Alejandra Romagnolli, Educational Management; Eliana Candido, Professor of Mathematical Physics and Cosmography; and Adriana Iturre, Professor of Geography and History. 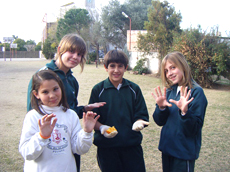 Members of the Secondary School "Dr. Bernardo Alberto Houssay" Science Club are making a local impact by studying the global issue of climate change. Students study the variation of rainfall patterns in Pujato from 1979-2008 and look for connections to support the possibility of climate change. Students made and recorded multiple direct observations, such as daily rainfall, rainfall coefficient, fluctuation coefficient, number of days of rain, and the intensity level of rain each day. The data were measured using GLOBE Atmosphere Protocols on-site at "Our Lady of Carmen" Primary School and represented through tables and statistical graphs. Data were compared with historical values and trends over the period studied. Finally, the students drew conclusions on the variation of rainfall and suggested techniques to increase water efficiency. With so many members of the community dependent upon farming and ranching, rainfall is essential to sustain the production of grain, fodder, soybeans, and livestock. Dry conditions also affect Argentina's vegetable oil production. 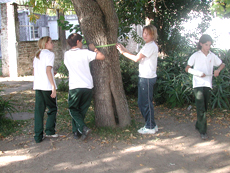 The students' other current project, "New Green in Pujato," tackles the need for reforestation to improve the local environment. Most Pujato residents work in job fields related to agricultural activities, requiring the use of herbicides and pesticides. Without forest to absorb the harmful chemicals, large amounts remain airborne, putting both humans and animals in danger. The restocking of woodlands rebuilds natural habitats and ecosystems and may also battle climate change. In addition to improving their local environment, the cultivation and planting of different tree species will allow students a widely varied study site for GLOBE Phenology Protocols.

The GLOBE Program was implemented at "Dr. Julio Maiztegui" Science Club of "Our Lady of Carmen" Primary School in the year 2000 when classes began employing Atmosphere and Phenology Protocols. "John F. Kennedy" Secondary School began performing Soil Protocols in 2004, later implementing Hydrology and Aerosol Protocols. Both schools continue to be extremely active in contributing data for the benefit of the GLOBE community as well as the rest of the world. Congratulations to GLOBE Argentina for your consistent contributions and continued participation in international events!