Held 4-6 April 2010, the 6th Annual Scientist Fair in the Kingdom of Bahrain explored one of the most serious challenges facing Arab Countries this century. The increasing demand for water combined with the decline of adequate resources is a dangerous, potentially life-threatening, situation. Climates in countries of the Gulf Cooperation Council comprise some of the harshest conditions in the world. Surface water resources remain severely limited, particularly in the coastal region along the Red Sea Coast of the Gulf of Oman.

Goals of the competition were to reveal students' awareness, talents, and abilities; encourage innovation of participants while providing appropriate conditions for creative research, and to promote the spirit of collaborative teamwork. Held under the patronage of Dr. Majed Bin Ali Al Noami, Minister of the Ministry Of Education, at Shaikh Khalifa Institute for technology, the fair involved more than 60 students from 18 schools. Assisted by 20 scientists who helped make the fair a great success, students worked from October until March to complete and submit their projects.

Schools focused on both traditional and rare water sources to support this year's theme of "Water Future" in Bahrain and the Gulf. Examples of these extraordinary student project proposals, which incorporated GLOBE GPS Measurement and Hydrology Protocols, include exploration of: 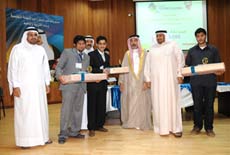 The Scientist Fair presented three prize-winning places. The 3rd place winners, Saar Secondary Girls School, won digital cameras for an environmental survey of the coast of Duraz in the Kingdom of Bahrain; 2nd place winners, East Riffa Secondary Boys School, received Dell Notebooks for their research on the impact of salt water from the desalination of seawater; and 1st place winners, Shaikh A. Aziz Boys Secondary School, won advanced laptops for their study of the impact of a landfill water desalination plant to reduce the proportion of salinity and seawater. Administrators distributed certificates among the participants, winners, and judges after honoring and thanking the group and their school coordinators for their efforts. Media outlets interviewed students and judges regarding the research projects presented in the fair.