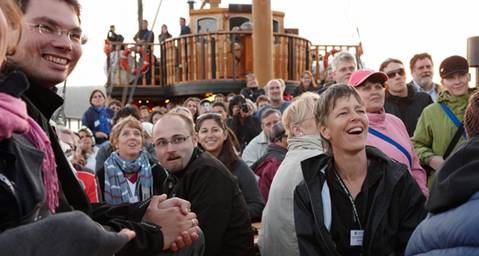 The International Polar Year (IPY) Oslo Science Conference, the largest ever Global Impact Gathering, took place from 6-12 June 2010. The event included polar and climate scientists from all over the world, members of indigenous peoples from Scandinavia and Russia, dignitaries from Norway and other European countries including Crown Prince Haakon as well as Prince Albert of Monaco, young polar scientists from the Association of Polar Early Career Scientists (APECS) and many GLOBE community members including GLOBE Program Seasons and Biomes phenology scientist and U.S. Partner, Dr. Elena Sparrow, who also served on the overall conference organizing committee.

Prior to the IPY Science Conference, a Polar Teachers Conference took place. Responsible for the conference was, Mr. Karl Hetland, also Country Coordinator for GLOBE in Norway. Over 120 teachers attended from around the world including many members of the Seasons and Biomes community such as GLOBE teachers Melanie Hinzman, Cheryl Williams and Sheryl Sotelo from Alaska; GLOBE teachers Regina Brinker from California and Maureen Nolan from Illinois; Markus Eugster, GLOBE teacher and trainer from Switzerland; Anne Briggs, GLOBE teacher from Australia; and GLOBE Alumni Matt Fenzel from Kentucky and Tomas Tunkl from the Czech Republic. Sotelo stated, "The Polar Science Conference in Oslo was a powerful experience with incredible networking possibilities presented with enthusiastic polar teachers and early career scientists. I left with many cards and possible projects to start with the new school year." 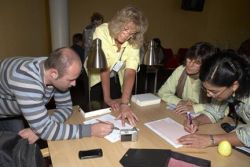 All GLOBE representatives shared impressive collaborative Seasons and Biomes student research activities through poster and oral presentations during the IPY Science Conference. Croatian GLOBE Teacher Sanja Klubicka commented, "I will share this experience and knowledge with my students, encouraging participation in community workshops for GLOBE Teachers and GLOBE Students to learn how to conduct Seasons and Biomes research." 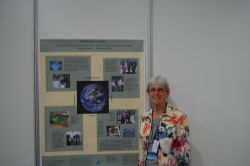 GLOBE Math Teacher Maureen Nolan, from Steeple Run School in Naperville, Illinois, teaches 4th and 5th-grade classes, giving students a chance to participate in GLOBE for two consecutive years. With the help of U.S. GLOBE Partner and Trainer Greg Lopatka, Nolan's students are aware and able to implement methods that scientists use to track climate globally. Nolan's young scientists currently study two trees on their GLOBE school site, as well as trees at the Morton Arboretum in Lisle, Illinois, utilizing the Bud Burst Protocol to observe when the buds of the trees appear in spring and Green Down Protocol to determine when the leaves turn color and drop in the fall. They also track weather each day, measuring soil temperature, and frost depth using a frost tube. Students realize that satellites don't give the whole climate picture, so GLOBE data collected from schools all over the world help fill in important gaps and details. They are also aware that conclusions about global climate change cannot be made in just a few years. 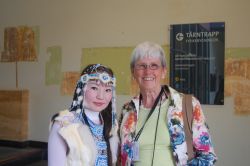 Nolan's adventure began when she signed up for the Student Climate Summit in Chicago. Her students delivered a presentation detailing their ongoing climate research at the Museum of Science and Industry in Chicago, where a video conference connected students in Colorado and Alaska. Two climate scientists were present at the museum, with another in Alaska who answered students' questions and commented on their endeavors. Because of Lopatka's involvement with Nolan's class, and her involvement in the climate summit, both Lopatka and Nolan were invited to the Oslo conference for a poster session illustrating their students' involvement in gathering environmental data for their climate research. Though Lopatka could not attend, Nolan enthusiastically participated on their behalf. 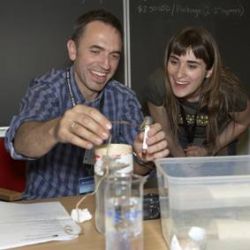 Teachers attended lectures and workshops at Oslo University to connect with APECS young scientists. Each teacher was paired with a scientist to exchange experiences and projects. Markus Eugster, GLOBE Seasons and Biomes Teacher, expressed, "It was a splendid idea to pair young scientists with teachers. I e-mailed before the conference with my APECS-scientist and met her later here in Oslo. The conference was a unique opportunity to meet some scientists and other teachers interested in Polar Regions from all over the world." Attendees also met with indigenous people from Russia and reindeer herders from Norway, the Sami nation. They shared their concerns about climate patterns and offered evidence of changing reindeer migration. Polar Scientist David Carlson spoke about the urgency of polar research and piloted activities from an outreach activity book called Polar Science and Global Climate, which had its debut at the conference. Dr. Ross Powell explained how Earth's temperature is tracked in the distant past from ice cores, and the role of polar ice in global climate processes. GLOBE Teacher Joanna Hubbard called the experience "immensely beneficial," stating, "I received a unifying and clarifying concept that served to overarch the information for the entire week – Earth is a system of systems. Truly, everything else I have learned in every venue has fed back to and supported this idea." 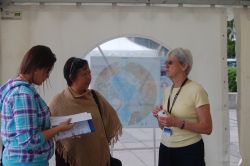 Nolan's presentation illustrated that her students are doing "real" science through monitoring their GLOBE weather station, outreach at the Morton Arboretum, and studying food chains in a local stream by raising bass. Students also teach other children and adults about GLOBE through their research. Onlookers were impressed that students of such a young age could be so knowledgeable and committed to environmental research. One scientist commented that "GLOBE students are part of the larger scientific community, adding knowledge to the total world's bank of knowledge." Nolan shared the comment with her students, who were very pleased that their efforts are appreciated by scientists.

Nolan collected a plethora of information to share with her students throughout the conference including the role of polar ice in research, extreme changes in the polar regions, the Sami's many different words for "ice and snow," ice and snow dynamics, ocean processes, and geological indications of climate change. Nolan enjoyed the entire experience, stating "I met wonderful people, visited a beautiful country, and was inspired to continue fostering real science and inquiry like GLOBE in my class." 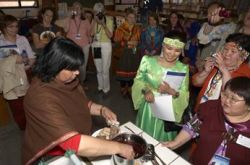 Since the IPY Conference, Nolan has a deeper appreciation for how committed her students truly are. She recently observed this devotion to GLOBE in an unexpected situation. "My students were out for a fire drill and we were standing, waiting for the call back to class. Students were starting to get fidgety, but not my students. They were marveling at the sky full of amazing contrails. They noticed themselves, and there we were, all looking up. One said, 'Too bad it isn't the right time of day to gather GLOBE data. I think the sky would be cloudless except for the contrails that are forming their own clouds.' GLOBE really opens the students' eyes!" said Nolan.

The GLOBE Program Office thanks all IPY Conference sponsors and committee members for allowing GLOBE to be a part of such a monumental gathering of scientists and teachers, coming together to assist in the continued research of students!

View this conference report, including the agenda and additional photos.