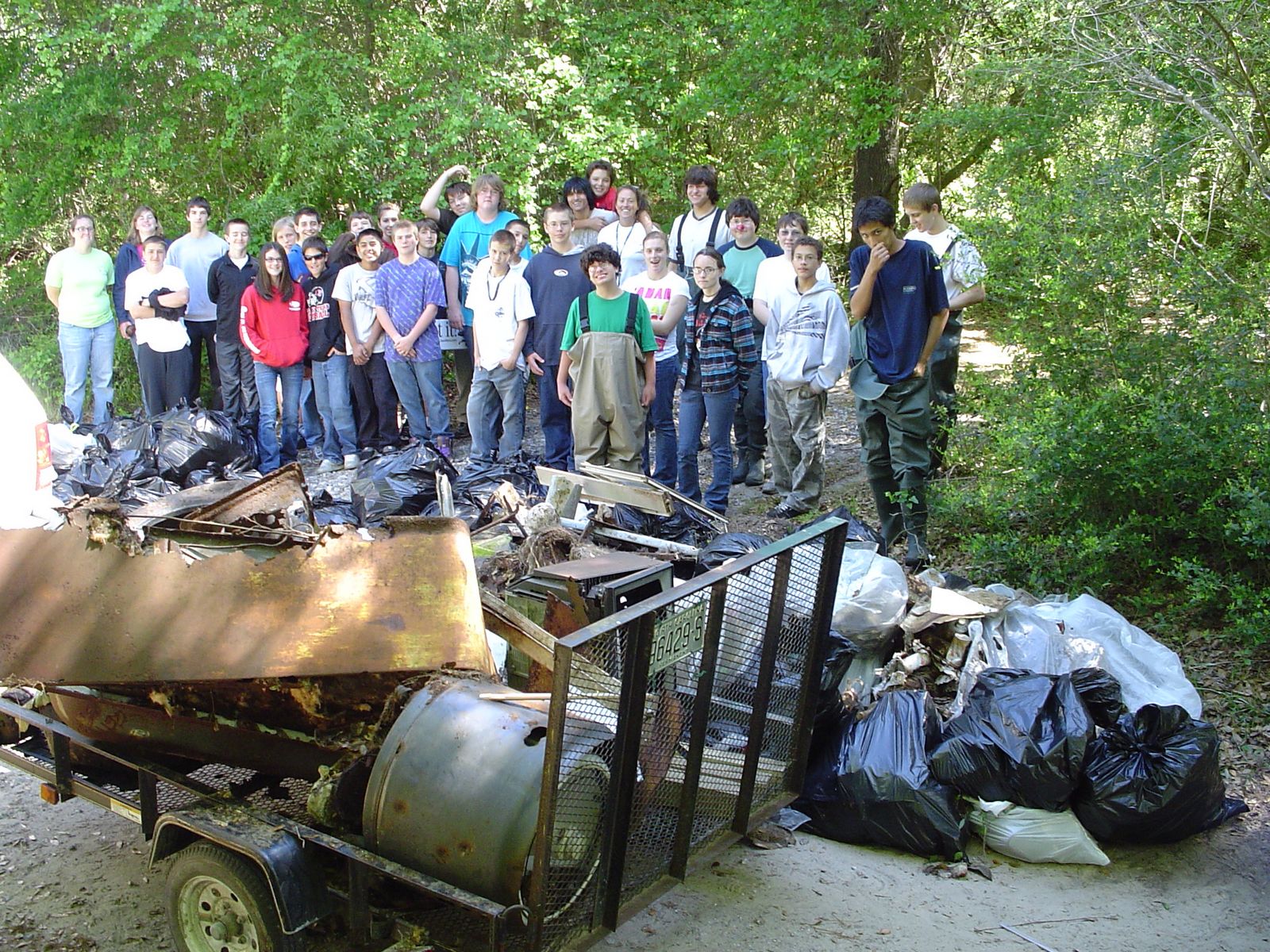 The month of April marked GLOBE's 15th birthday and served as a reminder to the GLOBE community of the importance of Earth and its resources. Earth's gifts are often taken for granted by those to whom they are readily available, while deeply longed for by those who are less fortunate. Through World Water Day activities in March, students investigated the global water crisis and learned how to turn their awareness into action to improve these issues. On 18 April, GLOBE students all over the world ran for the worthy cause of water conservation and quality. As part of the GLOBE Program's partnership with Live Earth, students from 10 countries ran 6 kilometers, representative of the average distance many women and children must walk each day in order to secure clean water for their families. GLOBE students in multiple countries also contributed to the clean-up of local watersheds, which corresponded with other beautification events held in honor of Earth Day on 22 April.

In South Africa, students came from surrounding areas to participate in the Live Earth 6k race held at the Spier Wine Estate in Stellenbosch. One teacher and two students traveled from Hibernia Primary School in George, while 23 students and 11 teachers, sponsored by the Department of Water Affairs, were driven by bus from Noble`s Transport in Ceres. The groups arrived in Balhar, Cape Town, the night before the race. Teachers worked in the kitchen of Maranatha Methodist Church to prepare curry and rice for supper, so participants would be full of energy for the next day's run. In the morning, following a light breakfast, the group headed to Stellenbosch where they received free t-shirts and their registration numbers.

After the race, the group was assigned to a designated tent with tables where they could display current projects and visit with students from other schools. The GLOBE tent was managed by Mr. David Papier, from Eden DM, and GLOBE student Grant Lottering. The group also visited other tents collecting activity guides and outreach resources. Through this exchange of ideas, students developed a strong sense of partnership with other schools and organizations. After a hearty lunch and a visit to Worcester shopping mall, students returned home. Special thanks are extended to Mark Brettenny (GLOBE Africa Regional Office), David Papier (Eden DM), and the Department of Water Affairs in Belville for their support in this event. GLOBE Africa Trainer Wally Du Preez states, "The Live Earth Event in Cape Town was a fun-filled and a very informative event. Our learners, mainly primary school, and two secondary schools were so excited to share their knowledge with visitors at our GLOBE table. The 6km walk/run at Spier, in remembrance of people who must walk that distance daily, just to get water for their daily tasks, was a real eye-opener to me and the rest of the educators who accompanied the learners. The rock concert afterward was 'so cool' according to the students." 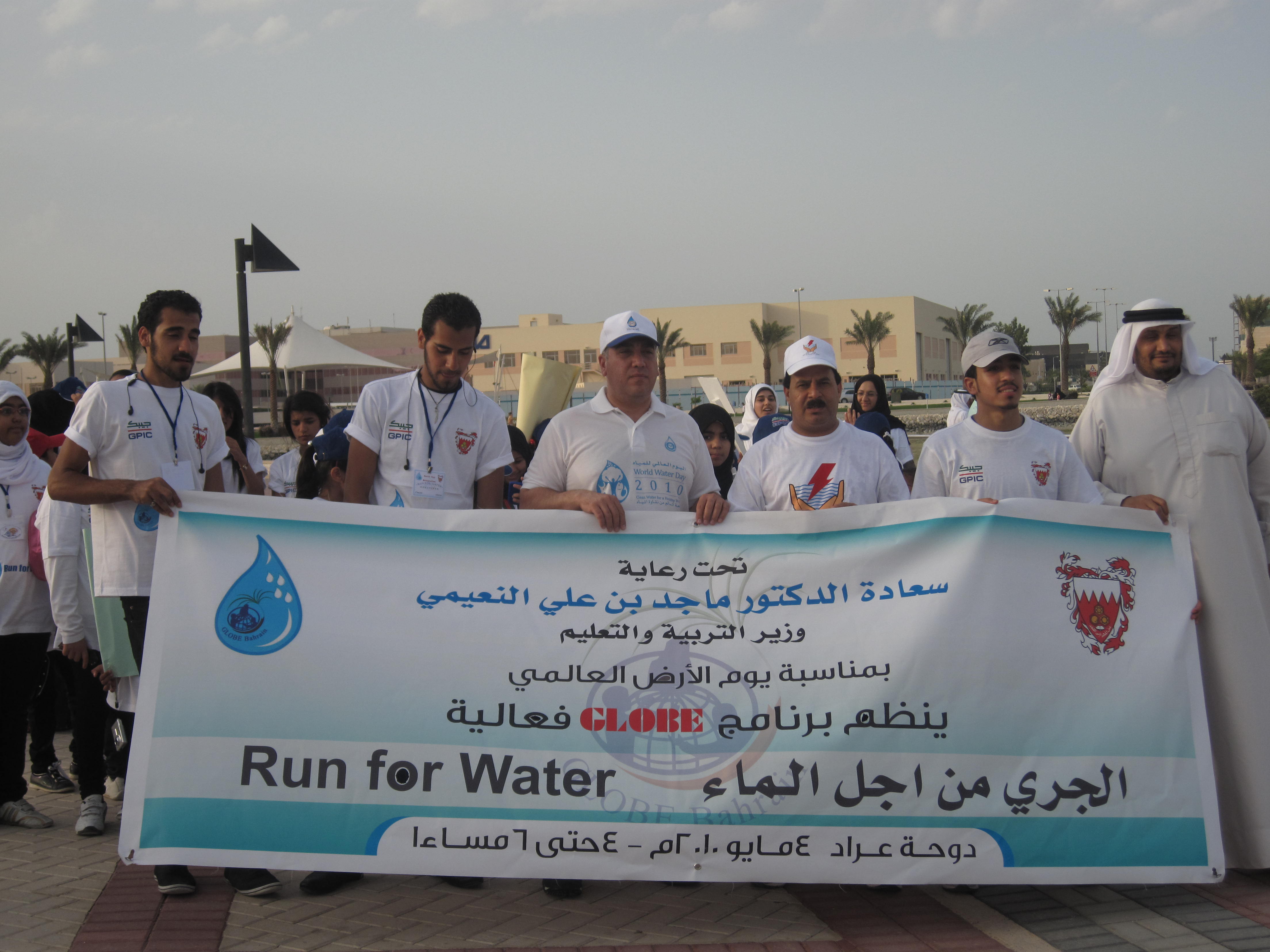 Annually, GLOBE Bahrain, along with the Ministry of Education, celebrates Earth Day with a different theme derived from a specific worldwide or local issue that has become particularly relevant to that year. Recently the issue of water accessibility in some less fortunate countries evoked interest due to the excessive amount of problems that result from water shortages. For this year's Earth Day project, students created awareness posters to support and promote the idea of water conservation. Following the same theme, GLOBE Program coordinators in Bahrain organized a 6km race at Arad Bay on 4 May in which participants were allowed to run, jog or walk for the sake of water. The Run for Water campaign was held in cooperation with other associates, including the Electricity and Water Authority/Electricity and Water Conservation Directorate, Public Commission for the Protection of Marine Resources, and Environment and Wildlife. More than 250 GLOBE students at various grade levels also enjoyed water education activities outside of school hours. Students had fun and contributed original ideas regarding the water situation around the world and what it means in their lives. 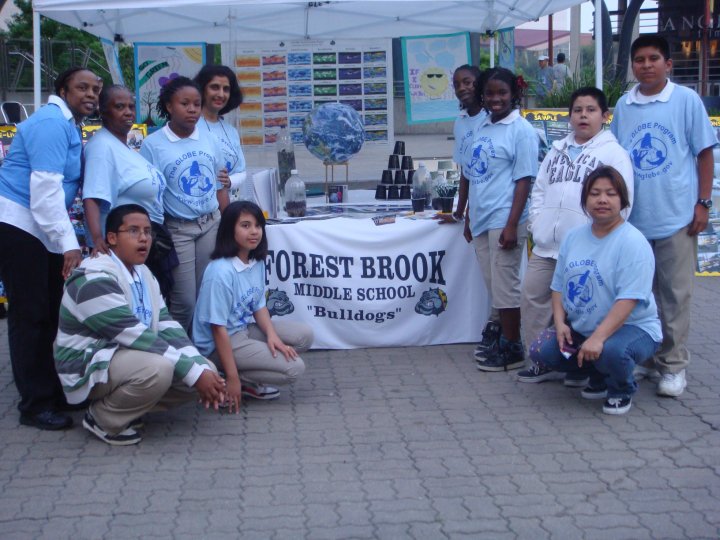 Live Earth participants at Forest Brook Middle School in Houston, Texas, walked or ran the 6k and taught people in their local community about pH and other qualities of water. Students also completed a GLOBE Student Science Research Project for World Water Day, which was incorporated into the Live Earth event. Christin Brown's class at Cape Hatteras Secondary School in Buxton, North Carolina, contributed to the environment with clean up efforts in honor of Earth Day. Through their partnership with the University of North Carolina's Coastal Studies Institute, the students raise fish and oysters in an aquaculture program that explores multiple scientific disciplines while incorporating state curriculum standards. This project has taught students how important it is that local water sources are kept free of harmful chemicals, trash, and other types of debris. Forrest Getz, from Creede, Colorado, shared pictures from the "Friends of Live Earth" event he created as part of his National Honor Roll Program. Forrest's GLOBE studies began as a student project on World Water Day and finished with a great community event featuring an appearance from regional representatives and his State Senator. We look forward to more great things from Forrest in the future.

The U.S. Embassy in Cyprus celebrated the 40th anniversary of Earth Day in cooperation with the Ministry of Education and Culture by co-organizing a public seminar intended to increase support for GLOBE by showcasing U.S. environmental cooperation with the Republic of Cyprus. The seminar took place at Ayios Georgios Lyceum in Nicosia and covered climate change and other GLOBE relevant topics. The speakers included Ambassador Frank Urbancic, Jr., Education Minister Andreas Demetriou, Dr. Manfred Lange of the Cyprus Institute, and Dr. Elena Kyza, a lecturer at the Cyprus University of Technology. The audience consisted of GLOBE high school students and several officials from the Ministry of Education. Minister Demetriou noted that "GLOBE is a perfect fit for the Ministry's holistic approach to Science and Technology education." Students from Saint George School in Cyprus organized GLOBE experiments and took Hydrology measurements at Pedialos River, which lies near the school. 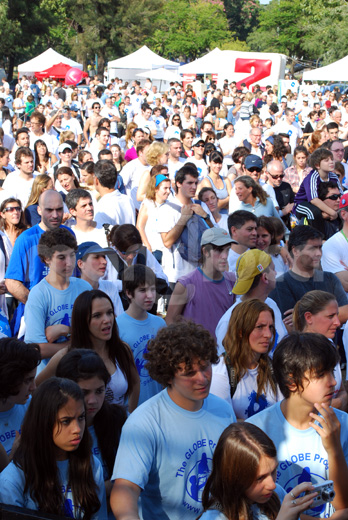 The Live Earth event in Buenos Aires was a great success as well, with over 7,000 participants who reported that the sunshine was beautiful in the morning, transforming into rain showers late in the afternoon. Their GLOBE tent received over 400 visitors and was very well organized, with participation from Colegio de Todos los Santos, Escuelas Técnicas Ort, and Instituto Industrial Luis A. Huergo. Finally, GLOBE Students from three schools gave lectures and answered questions about pH and water quality, with teachers close by to assist.

GLOBE Student participation in events such as Earth Day and Live Earth is extremely important as it contributes to the scientific understanding of Earth as a system and enhances awareness and participation in activities that benefit individuals worldwide by impacting their local environments.

Read about how GLOBE students celebrated Earth Day in past years: