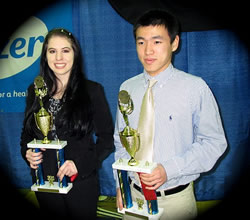 At Amity Regional High School in Woodbridge, Connecticut, students have the opportunity to participate in a four-year science research program in conjunction with their regular science course load. Under the tutelage of Science Research Instructor, Ms. Deborah Day, who helped to pioneer the program and shape the current 9-12 grade curriculum, students spend up to four years learning the components of scientific research and inquiry through hands-on research. Working with an out-of-school mentor, students research, design, conduct, and communicate their projects using the scientific method as well as participate in a variety of local, state and national science fairs including the INTEL Science Talent Search (STS). Graduating students culminate the program by participating in Amity High School's Annual Science Symposium. In the last two years, three Amity students, using GLOBE Hydrology Protocols, have conducted award-winning research projects and made outstanding contributions to the science community. The success of both projects is a testament to the hard work and dedication of the students and their commitment to scientific excellence.

In mid-March 2011, two Amity High School students participated in the 63rd Annual Connecticut Science Fair. The students' team project "The Effect of Fertilization and Environmental Factors on Water Quality in the Upper Cove River Watershed" won 2nd place in the category of Physical Science Team Project in the Senior Division. According to their report Abstract, "The purpose of this study was to determine the effects of the fertilization of a golf course and environmental factors on the surrounding aquatic ecosystem." 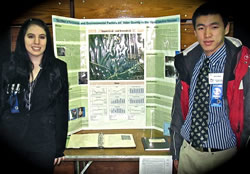 Under the direction of Dr. Scott Graves, U.S. Partner from Southern CT State University, the students collected water samples from two tributaries that combine at a confluence, as well as locations downstream from the confluence, to test ways in which natural environmental factors and human activities may potentially affect the water quality of the Upper Cove River watershed in south-central Connecticut. While the West Side Tributary originates in a wooded area and is undisturbed by human activity, the East Side Tributary flows from the ponds of a golf course, and the students speculated that it was likely affected by golf course activities. Water data, including Water Temperature, Dissolved Oxygen, Nitrate (NO3-), pH, and Electrical Conductivity, was collected at two locations on each tributary using Vernier electronic probes. Data was collected from October 2010 through February 2011, and all tests were done within one hour of solar noon. 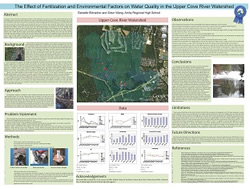 The collected water data was used to judge the water quality of each tributary, focusing particularly on the level of nitrate. The students hypothesized that runoff from the fertilizer at the golf course would elevate the nitrate levels of the East Side Tributary, a potential danger to the water quality as excess nitrate is problematic for bodies of water (see GLOBE Nitrate Protocol – Intro). Based on the data collected, the researchers concluded that the presence of the golf course did not negatively affect the water quality of the upper Cove River watershed. They stated that "while nitrate concentrations in the East Side Tributary coming from the golf course were slightly higher than nitrate concentrations in the control, the West Side Tributary, measurements indicate that the water is healthy for the sustenance of aquatic life and for human consumption. Also, data suggests that dissolved nitrate is filtered out as it flows through riparian wetlands between the spillway and the spillway outlet, as well as between the confluence and the confluence outlet." The researchers found that the nitrate levels appeared natural, below 1.0 mg/L, the pH fell within a healthy range for aquatic ecosystems, and the oxygen concentrations were well above the minimum 3.0 mg/L necessary to sustain healthy aquatic life.

According to their report, the science research project was important on both a local and global level. Locally the data collected by the young scientists allowed them to ascertain whether human activity (the golf course) was negatively affecting a local water source. Additionally, water data at the upper Cove River Watershed contributed "to the global understanding of the hydrosphere through the GLOBE Hydrology Protocol." This research project is an excellent example of the use of GLOBE Hydrology Protocols to evaluate local water bodies. 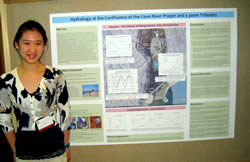 Another Amity High School student, also under the direction of Dr. Graves, utilized Hydrology Protocols to collect water data along the Cove River. Instead of concentrating mainly on nitrate levels, this research project measured the general water quality of the river. The student decided to measure the Cove River because of its unique combination of fresh and estuarine sources. Originating in New Haven's Maltby Lakes, the river drains into and out of West Haven's Phipps Lake and empties into Long Island Sound. The research project examined the water quality at ten locations in the Cove River watershed throughout July and August 2009. The student collected water samples along a 300-meter tributary to the Cove River and a 600-meter confluence out of its mouth. The samples were analyzed in the field for Water Temperature, pH, Dissolved Oxygen, Salinity, and Nitrate. Using Vernier sensors and probes, water data was collected weekly at noon for six consecutive weeks. 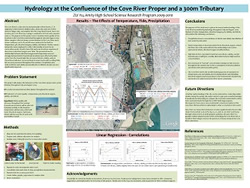 For her research project, the student hypothesized that water quality would decrease throughout the summer, that a downstream location would be affected by human activity on the beaches, and that upstream, nitrate levels would increase due to yard work and fertilizer runoff. The results showed that the upstream location experienced decreases in dissolved oxygen over time although the presumed inverse relationship between dissolved oxygen and temperature was not strongly demonstrated. Additionally, the student found that downstream locations were affected by tidal cycles from the Sound as high tides increased nitrate, salinity, and pH. The three indicators recovered back to lower levels with receding tides, but recovery worsened throughout the summer. Precipitation also reduced nitrate and salinity presumably due to dilution, however, pH was not significantly impacted.

Based on her research results, the student made the following conclusions: 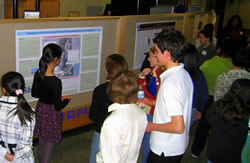 The student suggested that further research should be conducted and that the New Haven community be made aware of potential dangers. This project won the "Backyard Scientist" award for environmental studies at the 2010 CT Junior Science and Humanities Symposium, where the student was a poster presenter. The project also received Second Honors and won the Project Oceanology Senior Division special award at the 2010 Connecticut Science Fair.

The research endeavors conducted by these students are superb examples of the use of GLOBE Hydrology Protocols to evaluate local water bodies. Additionally, the data and posters produced by these students offer great additions to the Cove River Historical Site, which is under development by Dr. Graves as an informational and educational reference for Place-Based Inquiry.