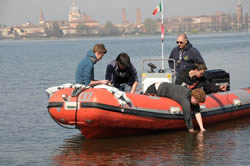 For the last several years, the Friuli Region in north-east Italy has been actively utilizing GLOBE Hydrology Protocols for several monitoring activities along the Mincio and Po Rivers, and along other river tributaries in northern Italy. In this region, GLOBE school Istituto Tecnico Industriale Statale Malignani (ISIS) Malignani and its collaborating schools have made terrific progress in the implementation and development of school networks involving environmental investigation and protection in co-operation with local, provincial, and regional public bodies and agencies. ISIS Malignani has become a reference point for the GLOBE Program in Italy. The school has taken on the role of a laboratory for environmental education, organizing and managing teacher training courses and large-scale scientific research events, and developing didactic and communication materials. According to Italy's primary Country Coordinator Sandro Sutti, "Schools such as ISIS Malignani are both the present and the future of the GLOBE Program in Italy."

In spring 2011, three major water-monitoring activities took place in the Friuli. This year marked the 21st Rivers Monitoring Project along the Rivers Mincio and Po which took place 3 May 2011. The project represented a whole school year of hydrology education during which students worked within school labs and learned about the investigative process, proper methods of data collection, and how to construct research reports on their findings. Other large-scale events for this region included the 11th annual "Fiumi Di Primavera" (Rivers of Spring) activity on 23 March, and the 12th annual "A Scuola Sul Fiume" (School on the River) investigation that took place on 4 May. 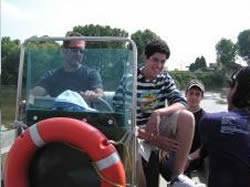 Along the Rivers Mincio and Po, two different school networks annually join forces to carry out a complex, two-part surface water quality monitoring activity: Project Mincio-Po and Project Macroinvertebrates, together referred to as the Rivers Monitoring Project. Project Mincio-Po investigates the quality of the rivers Mincio, Po, Goldone, and Osone through chemical and bacterial tests. Project Macroinvertebrates monitors the quality of the River Mincio and a number of its tributaries to investigate the presence and composition of macroinvertebrates. Both projects last an entire school year and are coordinated, assisted, and partially supported by Labter-Crea Environmental Education Centre. The Project Mincio-Po field investigation is limited to one monitoring day, generally at the end of April or at the beginning of May, while field investigation for Project Macroinvertebrates takes place over three months. Field investigations for both projects are preceded by activities in school labs and followed by the final sessions, which include data collection and reporting their findings.

On 3 May 2011, dozens of schools came together for Project Mincio-Po. The waters of the River Mincio (tributary of the river Po), the waters of the River Po and the waters of the rivers Goldone and Osone (main tributaries of the river Mincio) were analyzed. A total of 13 monitoring stations were placed along the water bodies being tested. Six Junior Secondary Schools made the analyses, tutored by four Senior Secondary Schools. (Junior Schools: Monzambano, Valeggio sul Mincio, Goito, Curtatone, Mantova Sacchi, Mantova Bertazzolo; Senior Schools: IS Fermi, ITA Strozzi and IPSIA Vinci in Mantova, and IPAA in San Benedetto Po.) 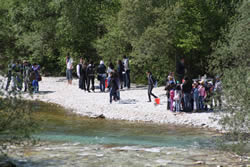 The investigation utilized GLOBE Hydrology Protocols to gather data, including Dissolved Oxygen (Oxygen Saturation), BOD5 (5-day test to measure the Biochemical Oxygen Demand), pH, Water Temperature, Nitrates, Phosphates, Water Transparency (Turbidity), Conductivity, Total Solids, Escherichia coli (E. coli), and Heavy Metals. Escherichia coli and Heavy Metals were analyzed in order to calculate some water quality indexes required by Italian law. Students and teachers alike enjoyed both the field measurements activities as well as the collaborative effort among schools and school networks. "I appreciate the fact that we worked together, exchanging information and advice, helping each other," said Elena, a third-year student at the Vocational School for Agriculture and Environment in San Benedetto Po. Andrea, a second-year student at the same school remarked that the project was "a very good experience between science and environment. I am very interested in water."

A comparison was made between the average values obtained in the 2011 monitoring day and the averages of historical data obtained in the 20 previous editions since the project's inception in 1991. The final report was prepared in July 2011 and sent to all schools who participated in the project, as well as the administrations of the municipalities where the schools are located. Students and teachers within the school networks used the final report to discuss the quality of the waters, the possible causes, and remedies. The report was also sent to local newspapers and television stations and published for the benefit of the wider community. 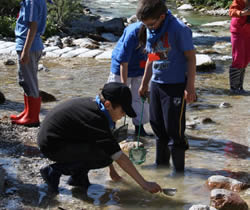 School on the River

Taking place immediately after the field investigations for the Rivers Monitoring Project, the 12th annual "School on the River" brought together students and teachers from several different school networks for an interactive outdoor education experience. On 4 May 2011, approximately 500 students and 50 teachers gathered for an activity under the Environment and Quality School Project to monitor the waters of Stream Torre, located between the towns of Musi and Zampitta. The event was primarily coordinated through GLOBE schools ISIS Malignani Cervignano Del Friuli and ISIS Solari Tolmezzo and concluded a school year of training, tutoring, and monitoring activities. It represents an important collaboration between primary and secondary schools and between schools and communities. 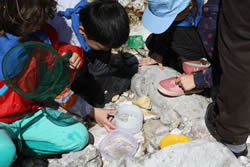 For this activity, 10 monitoring stations were set up along the river Torre, and the water was analyzed according to GLOBE Hydrology Protocols. Students tested for fecal coliforms and bioindicators such as Macroinvertebrates. Additional checklists of ecological and environmental parameters of the investigated areas were compiled according to the Project Act4 Rivers. In general, participants collected data necessary to calculate the River Functionality Index (IFF): Dissolved Oxygen, pH, Water Temperature, Nitrates, Phosphates, Water Transparency (Turbidity), and Conductivity, as well as testing for Fecal Coliforms, Macroinvertebrates, and Macrophytes.

Data results were reported on posters for discussion among teachers, students, and other participants. The data was also published in a bulletin to be sent to the local community. GLOBE school I.T.I. "Malignani 2000" Cervignano del Friuli has played a major role in coordinating the annual "A Scuola Sul Fiume" for the last 12 years since the project was initiated in 2000. This year several different schools and school networks participated in this event: 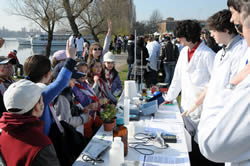 To celebrate World Water Day on 23 March 2011, thousands of people, including students, teachers, and local residents, took part in a multitude of scientific, naturalistic, and artistic activities on Montoca Lakes and the Mincio River. This was the 11th annual "Fiumi Di Primavera" gathering for the people of Mantova, Northern Italy, and is the largest European event organized to celebrate World Water Day. The focus this year was to promote the awareness of water consumption and make connections between water and energy. The waters of the Mantova Lower Lake, made by the River Mincio, were analyzed by three Senior Secondary Schools: ISIS Malignani in Cervignano del Friuli, ITA Strozzi in Mantova, and IS Fermi in Mantova. 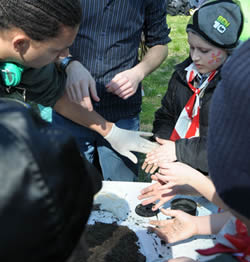 Water was analyzed according to GLOBE Hydrology Protocols, including Dissolved Oxygen, BOD5, pH, Water Temperature, Nitrates, Phosphates, Water Transparency, and Total Solids. Demonstrations were also made on how to filter water to detect E. coli. The data was used to discuss several water-related issues with Rivers of Spring participants, including surface water quality, pollutants and possible steps of remediation.

The World Water Day, Rivers of Spring event is a wonderful public activity for students, teachers, and community members. Mara Saccani, a teacher at Junior Secondary School in Viadana, thanked the coordinators of the event stating, "Dear friends, thanks for the memorable day. The students have spoken about it with all the teachers, calling it the most beautiful day of their school life."

Congratulations to the GLOBE community in Italy, Labter-Crea Environmental Education Centre, and GLOBE Italy Country Coordinators Sandro Sutti and Lorella Rigonat for their hard work and astute vision in organizing and directing these major events.