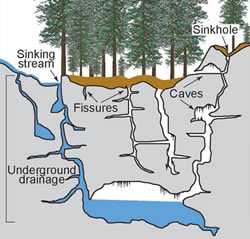 The Ohio Valley is located in a karst area, a type of landscape shaped by the dissolution process of soluble rocks such as limestone, dolomite and gypsum, often resulting in sinkholes and caves. Superficial karst areas are formed by underground cracks or fissures beneath the surface, which eventually collapse due to the underlying caves. Over time, water erodes the fissures and the ground below sinks forming a sinkhole. Adams County in Ohio has thick layers of Dolomite rocks followed by Lilly shale and limestone formation. A sudden collapse of underground caverns or open sinkholes can cause severe geologic hazard that can significantly damage or destroy above-ground structures such as buildings, bridges and roads. Another threat of sinkholes is the potential of cross contamination of sewage, animal wastes and industrial chemicals draining into sinkholes at the surface into the ground water-system below, or aquifer. And finally, the sudden falling away of ground matter to form sinkholes can be detrimental to all living beings, including both humans and animals. One afternoon, Donna Shepherd, GLOBE Partner with the Technology Resource Facilitator for Ohio Valley Schools in Adams Country, was searching for a missing young goat on her farm when she discovered that the goat had fallen down into a hole just large enough that his head was still partially visible. Thankfully, Donna and a friend were able to rescue the goat, but the situation provoked curious thoughts regarding the abundance of sinkholes in the area. Adams County in the Niagara Escarpment of southwestern Ohio is one of the most significant karst regions in Ohio, and includes the largest number of surveyed caves, and estimated second-largest number of recorded sinkholes. 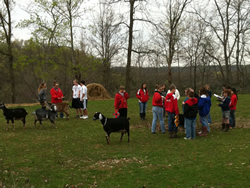 Following this experience, she wrote and received a grant from the Ohio Appalachian Center for Higher Education (OACHE) at Shawnee State University that funded four trips within Adams County to locate and research sinkholes. Shepherd; Jessica Wilkinson, sixth grade GLOBE Teacher at Peebles Elementary; and Mary Young at Peebles High School teamed up with Douglas Aden, Ohio Department of Natural Resources, Division of the Geological Survey, Mapping Unit, to apply GLOBE Protocols to sinkhole research. The team trained students in the use of handheld GPS systems to supplement their research to include formations and structures in Adams County. Students provided a modified GLOBE site description that included two length and width measurements, depth measurement and a site conditions statement. The students took five GPS readings, each taken one minute apart, and then averaged them at each site in order to provide accurate sinkhole locations. 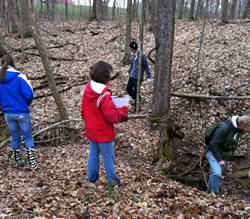 During the first fieldtrip, students identified ten sinkholes and practiced taking measurements and recording data. On the three subsequent trips, students formed teams made up of two or three juniors and seniors, and four or five of Mrs. Wilkinson's sixth-grade students. Each team collected data at various sites totaling 40 sinkholes. One student commented, "The sinkholes were everywhere and I didn't expect there would be this many." The high school group learned to use the Environmental Systems Research Institutes (ESRI) ArcGIS program to make maps of the sinkhole locations (left picture). GLOBE students also used a compass to orient a geologic map of the area they were studying. From the ArcGIS maps, students identified the rock units in which the sinkholes were found as being predominately Peebles Dolomite. They also observed that most of the sinkholes in their research area are located at elevations around 900 feet above sea level. Two of the groups visited a rock cliff above a stream in the sinkhole area and were able to view the superficial Peebles Dolomite layer over the Lilly and Bisher formations, composed mainly of inner bedded shale and limestone. It was evident at this site that the underlying layers were made of softer material that weathered and eroded more quickly than the Peebles Dolomite. The dolomite had been undercut by the running water and many large slabs had fallen into the streambed. Some areas had multiple sinkholes; other areas had smaller, more isolated sinkholes. Some of the sinkholes were depressions and others had openings from several inches to a foot or more (right picture). Viewing aerial photos in the mapping program, students began to speculate on other locations where sinkholes may be located. The compass was also used to provide a bearing and distance to an easily observed structure on the aerial photos. The State of Ohio uses English units on their maps, but students used metric measurements and then converted to the English units to use in placing the locations within the sinkhole shapefile used in ArcGIS. This information will be sent to the GIMS data base and will give the students in Adams County credit for collecting the data. The students were excited to hear their data would be added to the Ohio Department of Natural Resources (ODNR) maps of Ohio karst regions. 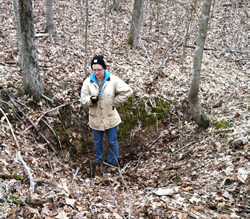 Many of the sinkholes located were used as trash or brush dumps for many years. One sinkhole was used to burn leaves and grass clippings, resulting in the formation of a sitting pond. Students found tree stumps, building materials, trash, and deceased animals discarded in these depressions. Since property owners indicated some misuse of the sinkholes, the sixth grade students intend to provide awareness by making and displaying posters around the community about sinkhole contamination, warning that sinkholes can channel surface water into springs and streams. One of the students stated, "We got dirty and muddy but it was fun to get out and see what we learned about in class." After learning about sinkholes, Ohio GLOBE students are actively defending the environment by informing people that dumping in these areas should not be tolerated.

Students found the sinkhole field trips memorable and appreciated the opportunity to actively contribute to this important research, one noting, "I don't think I'll ever forget doing this." Donna Shepherd is currently seeking additional funding to expand her research and add to the database of information about sinkholes, not only in the Peebles area, but in all of Adams County, Ohio.