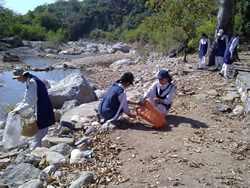 For over a year GLOBE students of OPF Girls College, Islamabad, Pakistan have been using Hydrology Protocols to conduct measurements along the Shahdra stream. Through many visits, these students have developed a special association with this water body. This year, in celebration of World Water Day, they decided to thoroughly clean the area of the stream where they collect hydrology data. On 24 March 2011, students gathered at the stream and picked up all the food packaging, disposable glasses, shopping bags, empty bottles, and other garbage that had been thrown into and along the water. As the water level was fairly low and moving slowly, the students could easily see and remove the wrappers and bottles thrown into the water. After an hour of work, the students had cleared all the waste from the area; the cleanliness of the stream water and its surroundings gave them a strong feeling of satisfaction. 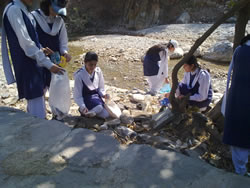 Observing the variety of macroinvertebrates and many small fish in the clear water, the students realized firsthand how valuable their work was. Since water waste can be extremely harmful for these and other small freshwater creatures, students recognized that they were helping to protect life within the stream. The GLOBE students caught three fish, transferred them to a beaker full of water and observed bodily features such as color, patterns, and fins before releasing them back into the water. The fish were silver and gold in color; they had two sets of paired fins, a single fin, and a caudal fin. 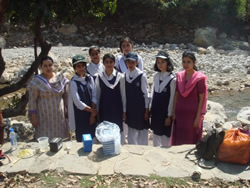 After cleaning the area, the students measured Water Temperature, pH,Water Transparency, Alkalinity, and the amounts of Dissolved Oxygen and Nitrate in the water. They compared the numbers to the data collected from their last six visits to this site from April 2010 to March 2011. The students found that there was little change in the pH, amount of dissolved oxygen and other characteristics of water, as this area is not often subjected to human activity. When they returned home, the students made a promise to continue cleaning the site every time they visited it and to never contribute to any kind of water pollution anywhere in the world. 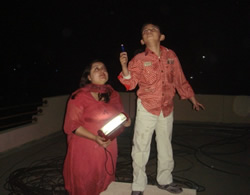 Another exciting event in March for GLOBE students in Pakistan was GLOBE at Night (G@N). On 6 March 2011, a group of GLOBE students and teachers gathered to record the brightness of the visible stars. Locating the constellation Orion, they observed very clearly the three bright stars forming the "Belt of Orion." Surrounding the belt at roughly similar distances, they also recognized four bright stars, representing the outline of hunter's body. Students drew sketches of what they had seen to supplement their visual observation. Additionally, students observed and recorded the level of light pollution using G@N Magnitude Charts to judge the visible brightness level of the constellation Orion. After reporting their data on the G@N website, the students were later able to locate their site through Google Earth. These observations for GLOBE at Night allowed the students to interactively experience what they had been discussing in their geography class.

In addition to their superb work in helping to combat pollution, and participation in community events such as G@N, the OPF Girls College in Islamabad has made the Chief Scientist's Honor Roll 4 times for data collected; twice for Clouds and twice for Atmosphere. 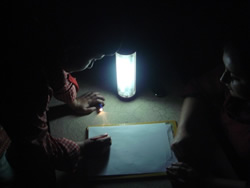 Pakistan joined the GLOBE community 18 November 1997, when the GLOBE Agreement was signed in Islamabad by U.S Secretary of State Madeleine Albright and Minister of Foreign Affairs, Gohar Ayub Khan. Appointed in 2009, Mr. Jawed Ali Khan, GLOBE Country Coordinator and member of the Ministry of Environment, has actively engaged in implementing GLOBE within Pakistani schools. "The government of Pakistan is very much concerned about the environmental degradation in Pakistan. The GLOBE Program provides us with a scientific and technical platform to provide training to teachers and students which will increase environmental knowledge and minimize environmental degradation in the country." There are currently 12 schools participating in the Pakistani GLOBE program.

Read additional Stars from Pakistan and the Near East North Africa Region: