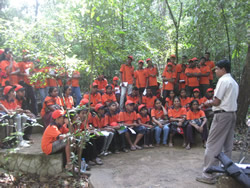 The GLOBE Program in Sri Lanka organized a residential two-day student campaign in March 2011 at the Ibbagamuwa Resource Center in Kurunegala, Sri Lanka. The campaign was organized by the Agriculture and Environment Studies Branch, Ministry of Education, and the Agriculture Unit of the North Western Provincial Education Department. The campaign was organized to increase the awareness of GLOBE Hydrology and Land Cover Protocols among school children in order to expand student participation in GLOBE activities, and commemorate World Forest Day and World Water Day.

Ten teachers and sixty students representing ten schools participated in the North Western Province Campaign. Activities were designed for senior students to share the GLOBE experience with newly enrolled students to encourage them in conducting student research, with particular emphasis on Hydrology and Land Cover. This two-day event allowed participants to present their collected data and increase awareness of GLOBE activities in hopes of inspiring community participation. 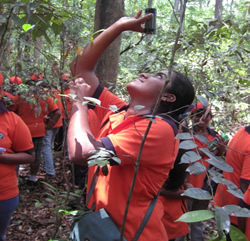 The first day of the campaign commemorated World Forest Day with a Land Cover study at the Badagamuwa forest. Students and teachers were divided into four groups to conduct activities, including canopy cover, tree height, tree circumference, ground cover and biomass measurements. In addition to students and teachers, program participants for the Land Cover study day included officials from the Ministry of Education, North Western Provincial Education Department, and Central Environmental Authority.

A Hydrology study was held the following day at Bathalagoda Lake in Ibbagamuwa, in recognition of World Water Day. Students conducted GLOBE Hydrology Protocols to measure Transparency, Temperature, Dissolved Oxygen, pH, Electrical Conductivity, Salinity, Alkalinity and Nitrate content of the water. Students were given a certificate in recognition of their participation and went on to prepare reports and presentations of their activities. 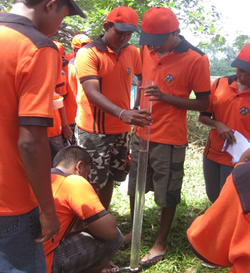 Districts Kurunegala and Puttalam compose the North Western Province of Wayamba, Sri Lanka. Kurunegala is the capital of Wayamba, has a population size of about 28,571, and is known for its coconut plantations. Geographically, Kurunegala is located on a plain area surrounded by rock outcrops, visible exposures of bedrock or ancient deposits on land. Kurunegala has a tropical climate and is hot throughout the entire year. The surrounding rocks contribute in determining Kurunegala's weather, as the rocks themselves can retain and increase heat levels. In April, the temperature can rise as high as 35° Celsius (95°Fahrenheit); temperatures during late November to mid-February are lower. The monsoon season in Kurunegala brings heavy rains from May to August and October to January, bringing the annual rainfall to about 2,000 millimeters. Kurunegala Lake is the primary geographical feature of Kurunegala and an aesthetic centerpiece of the town. Badagamuwa Forest Reserve, located alongside Kurunegala Dambulla's main road, has been considered a "tourist zone" by the Forest Conservations Department since September 2008. The forest is a popular spot for nature walks, paddle boat safaris, bird watching, and a floating restaurant built on a natural lake inside the forest.

Sri Lankan students and teachers utilize GLOBE initiatives to encourage the preservation of the Badagamuwa Forest. The Ibbagamuwa Resource Centre student campaign is an excellent opportunity for GLOBE Students to develop leadership, organizational, and problem-solving abilities.

Read other GLOBE Stars about student activities in Sri Lanka: