On Tuesday, 17 April 2012, the annual OhioView SATELLITES Student Conference met at Penta Career Center, a GLOBE school in Perrysburg, Ohio. This event was organized by GLOBE Partner Dr. Kevin Czajkowski with the assistance of Project Coordinator for OhioView, Ms. Gale Nader, and Dr. Mikell Lynne Hedley with the University of Toledo. The conference was sponsored by OhioView, the University of Toledo, and the Penta Career Center. More than 65 K–12 and college level students attended and 45 student projects were displayed. Dr. Czajkowski was very impressed with the success of the conference and stated, "The quality of students' research just keeps getting better. I learned so much from the students." 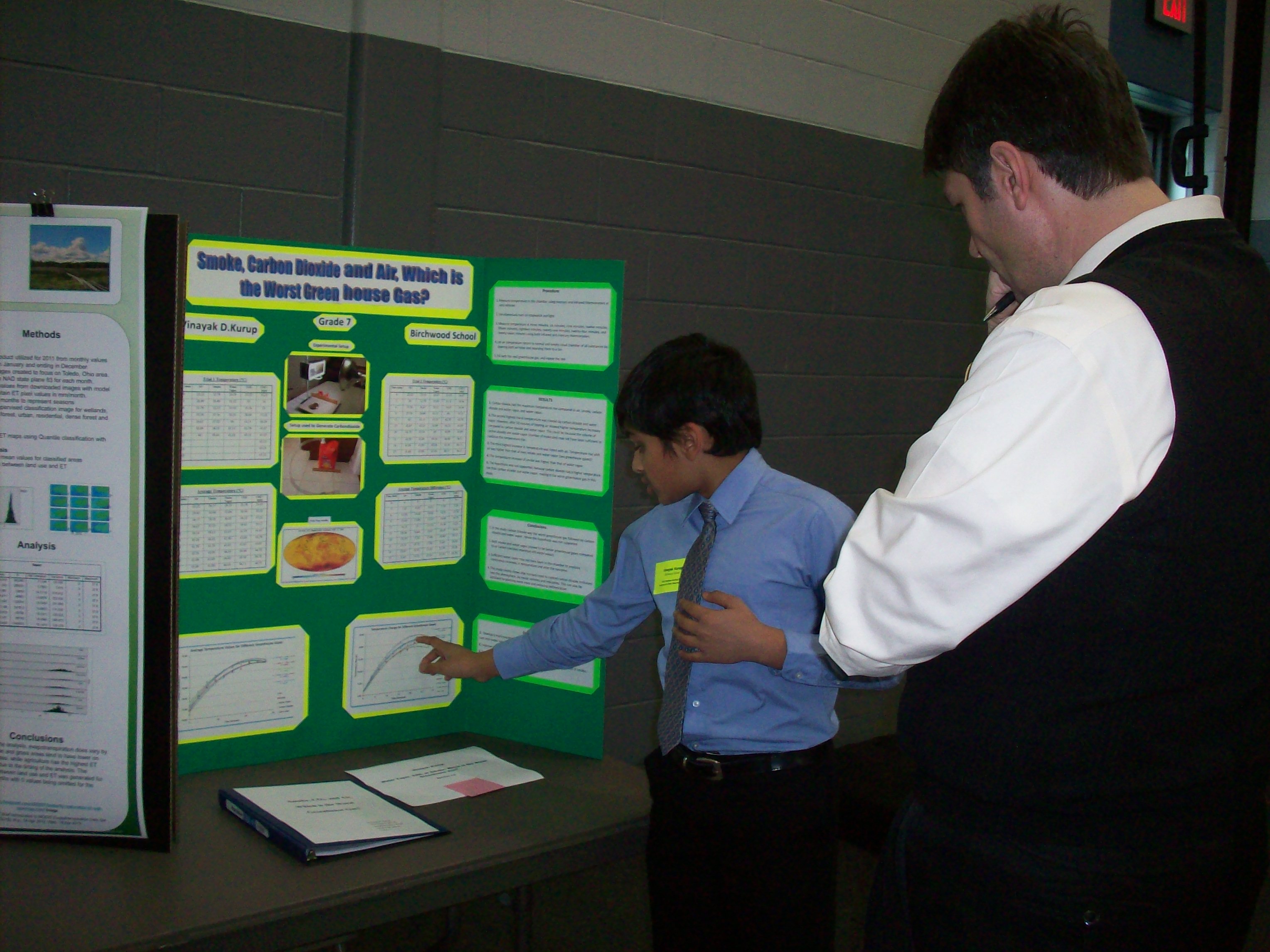 Many GLOBE students presented at the conference, resulting in some winners in both the 7–9 and 10–12 grade levels. Vinayak, a student at Birchwood School in Cleveland, Ohio, won 1st place in the 7–9 grade level with his project, "Water Vapor, CO², or Smoke: Which is the worst Greenhouse Gas?" According to GLOBE Teacher Ms. Linda Brown, Vinayak excels in math and science and received a superior rating at the Ohio State Science Fair. He also competed in the district MathCounts, and was recently named the Ohio Mathematics League 7th Grade champion. In his project, Vinayak researched which greenhouse gas (smoke, carbon dioxide, water vapor, or a combination of water vapor and carbon dioxide) would cause the greatest rise in temperature. Using GLOBE temperature protocols, satellite imagery and a sealed cloud chamber, Vinayak's research determined that carbon dioxide caused the greatest temperature rise, followed by the mixture of water vapor and carbon dioxide. However, like a seasoned scientist, Vinayak noted, "Although carbon dioxide produced the greatest temperature increase in my model, this may not be true in real life situations. In my test, the water vapor condensed against the glass, but in real life, water vapor is constantly heated, keeping the water vapor in vapor form. I believe that water vapor has the potential to surpass the rise in temperature produced by carbon dioxide." 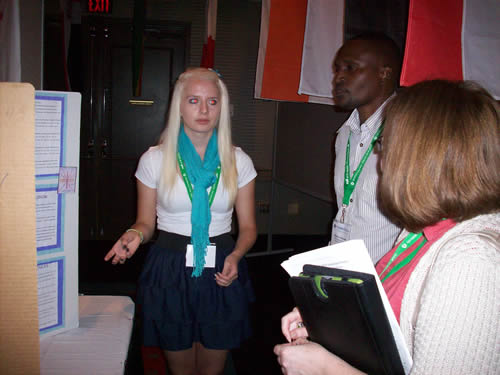 Kaitlin, a 7th grader at Roswell-Kent Middle School in Akron, OH, claimed 2nd place with her project, "Climate Change Correlation with Malaria Cases." According to her GLOBE teacher, Mr. Steven Frantz, "Kaitlin is an exceptional student whose favorite subject is math." Using GLOBE atmosphere protocols such as surface temperature, Kaitlin explored whether there were any correlations in malaria cases to different climate areas. She hopes that her study will help scientists and medical professionals learn more about malaria and how to prevent its spread. Kaitlin enjoyed the challenges of her project and learned a great deal about how to overcome those challenges. Mr. Frantz also mentioned that while being in front of the judges, Kaitlin enjoyed the numerous questions that were asked about her project. "All in all, Kaitlin is an intelligent and hardworking GLOBE student that rises above when presented with scientific research challenges," stated Frantz. Winning 2nd place at the SATELLITES Conference and receiving a superior rating on Science Day has given Kaitlin an exciting year. She was also chosen to present her research at the 2012 GLOBE Annual Meeting in Minneapolis, Minnesota, and placed second at the GLOBE Student Science Symposium, which was held at the Meeting. 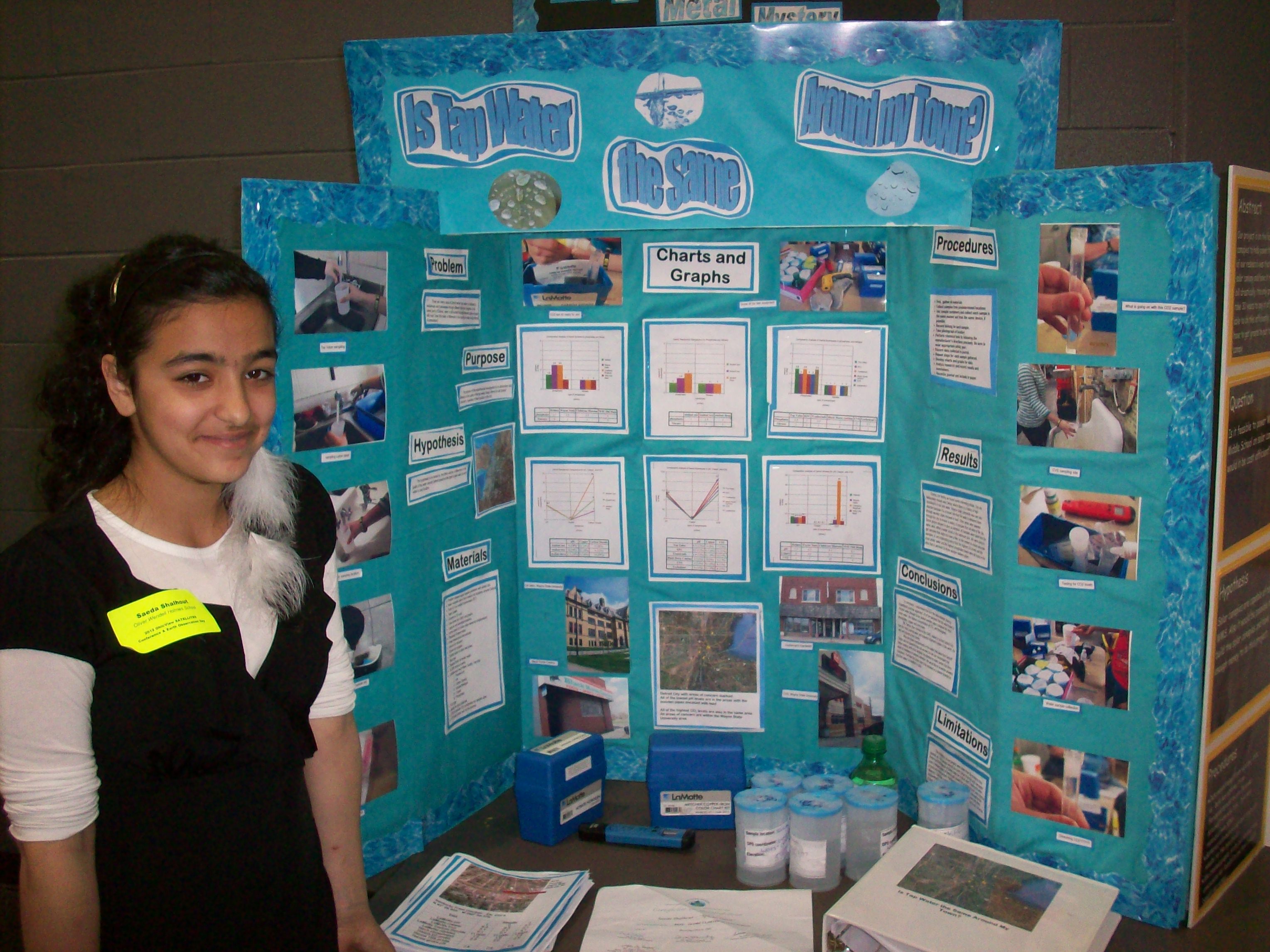 Third place winner, Saeda, was inspired by an older sister to develop her project, "Is Tap Water the Same Around My Town?" GLOBE science teacher Ms. Connie Atkisson stated, "Saeda is an inquisitive student who challenges facts and information to get to the truth." After discovering that parts of central Detroit still have lead covered wooden pipes from the 1800s, Saeda performed research to determine whether the water provided in this area would show different results than in other parts of the city. With the help of Ms. Atkisson, Saeda collected samples from the Detroit River to the edge of Royal Oak and Livonia and the downriver communities in Detroit. Using GLOBE hydrology protocols including alkalinity, dissolved oxygen, nitrate, pH, and water transparency, this inquisitive student found that there is a higher pH and CO2 level in the older parts of the city compared to the newer parts.

GLOBE students are taking science into their own hands in order to expand the knowledge base surrounding local and national environmental issues. The GLOBE Program Office would like to congratulate these students on their award-winning research projects and wish them luck in future endeavors that will benefit the Earth and humankind!

Read about the 2011 SATELLITES Competition:

The ‘Satellite Girls' from Akron, Ohio