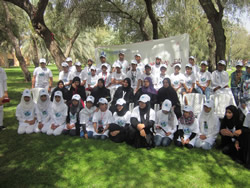 On 2 May 2012, representatives from GLOBE schools in Oman came together in Al Qurum Natural Park, the largest park in Muscat, to participate in the first forum for GLOBE students. The event was sponsored and organized by Oman's Ministry of Education. The programs and activities planned throughout the day were designed to emphasize the hard work and accomplishments of GLOBE schools during the 2011-2012 school year and to encourage teamwork and collaboration between schools. GLOBE schools are spread throughout three regions in Oman—Muscat, Al Dhahira, and Al Sharqiya North—each with a boys and girls school. Schools attending the forum included Al-Mubaila Al Shamalia School, Al-Sheikh Salem Bin Humoud Al-Siyabi School, Samad School, Alhawary Bin Mohammed Al-Azdy School, Ibri School, and Ammar Bin Yasser School. Students, teachers, and administrative officials were also present to enjoy this momentous event. 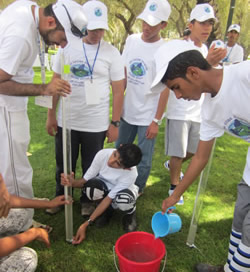 Each school presented student projects and activities implemented throughout the year and talked about the role GLOBE plays in their educational practices. This event provided a great opportunity for Omani GLOBE community members to come together and exchange feedback on successes and challenges experienced in their first year implementing GLOBE. One student from Ibri School expressed, "Since participating in the program, I've been able to practice recording scientific research related to the environment, and I like how GLOBE encourages collaboration among students." In response to the forum the student went on to say, "I enjoyed the activities we did at Al Qurum Park, especially presenting the projects that we have done in our schools. It was fun to share my research with students my age in other regions of my country. I hope to encourage other students like me to make more of an effort to preserve the environment." 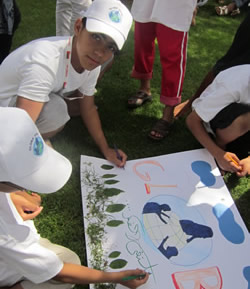 An additional activity required students to divide into groups to discuss what GLOBE means to each of them; after discussions they presented their thoughts about GLOBE to the group through poster drawings, poems, plays and simple speeches. One student from Al-Sheikh Salem Bin Humoud Al-Siyabi said, "I like how GLOBE encourages the spirit of interdependence with the environment and also helps me improve in math and geography as I learn about connections between disciplines and their relationship to the environment." When asked about the event, the student further conveyed, "I enjoyed getting to know and exchanging experiences with other students in the program. I urge other students who are not participating in GLOBE to join because of the significant benefits it has connecting us with our environment!"

Oman Country Coordinator Mrs. Asma Salim Rashid AlBelushi stated, "GLOBE raises environmental awareness among students, improves learning methods for scientific research, and raises the level of academic performance for students in science, social studies, and mathematics. Through this forum, we want to emphasize the importance of teamwork and collaboration to help achieve those goals." The event was built around team exercises that helped the students develop new relationships and get to know other students from different schools. One exercise called "Save the Water" had groups of students transport water from one end of the arena to another without spilling. Many additional team building exercises took place to promote collaboration. 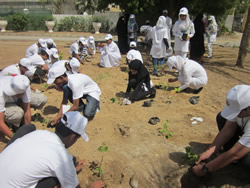 The event concluded with participants planting tree seedlings in Al Qurum Natural Park. They also shared with each other ideas on how to implement GLOBE in their schools for the next academic year. By the end of the event, many of the students expressed their desires to share their experiences with their classmates on what had been accomplished that day. A student from Al-Mubaila Al-Shamalia stated, "After returning to my school, I'm going to tell my friends about the first GLOBE forum and about the environmental activities designed to contribute to our environment." She promised to urge others to participate because of its great importance in their everyday lives.

The 2011-2012 school year was the first year of GLOBE implementation for Oman schools. According to Ms. AlBelushi, it has given their schools an opportunity for teachers and students to interact with their counterparts in their country, their region, and around the world. She appreciates how it "provides our students with practical activities to take accurate environmental measurements such as air and soil temperatures, soil pH, and that their students have learned about clouds, soil characterization, transparency of water, and land cover."

Oman became the 112th country to join the GLOBE Program on 8 December 2009. At the time, there were only ten GLOBE teachers from six Omani schools that received training from regional GLOBE Master Trainers. Those 10 teachers were taught how to assist students to form research questions, gather key scientific measurements, and submit their data to the GLOBE database. In 2010, an orientation on the GLOBE Program was held for the six schools that included teachers, supervisors, headmasters, and administrators. On 8-12 October 2011, 27 teachers attended the first large scale teacher training workshop in Muscat, Oman, as the first official step to GLOBE implementation in Omani schools. In addition, Oman was the host of the 2012 Near East+North Africa Regional Meeting on 9-10 February 2012. All of these events occurred with the hope that those present will serve as an example to guide other GLOBE schools, teachers, and students in the future.