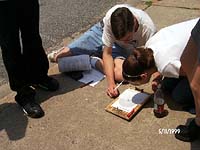 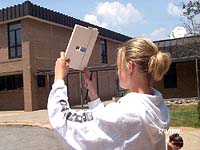 The local newspaper in Denver, NC, took front-page notice that students at East Lincoln High have been asked by scientists to test new measurement instruments for potential use in the GLOBE Program.

"The kids enjoyed doing this, it's really cutting-edge science" said GLOBE Teacher Debbie Michaels. Pictures in the newspaper showed the GLOBE students using a sun photometer - which measures the amount of sunlight at a specific wavelength - and a solar gnomon - which determines the angle of the sun's shadow.

In the past, sun photometers have been expensive to buy and maintain. But GLOBE Principal Investigators David Brooks and Forrest Mims have designed sun photometers that are inexpensive and easily maintained. The work by Ms. Michael's class at East Lincoln HS is demonstrating that students can make these measurements, thereby contributing to a better understanding of what is happening in the atmosphere.

After testing is completed, the hope is to have GLOBE classes around the world use these instruments to determine the concentration of atmospheric aerosols at different times and places. Aerosols are particles suspended in a gas, such as air. In the atmosphere, aerosols are often associated with haze. It is important to know the concentration of natural and man-made particles - like water vapor, dust, soot, and plant pollen - because of their possible effects on climate, plant growth, visibility, and health.