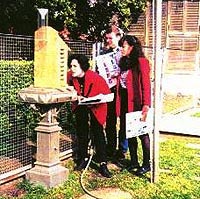 Congratulations to GLOBE Portugal for its presentation of The GLOBE Program and its first entry of GLOBE data!!

Portugal celebrated the first entry of Portuguese GLOBE data at a formal launching of GLOBE Portugal on March 21, 1997. GLOBE students, government representatives, and the Portuguese GLOBE support team performed atmosphere and soil protocols at selected sites in the Vila Real school yard, and then entered this data.

Another exciting feature of the celebration was a video conference linking Vila Real to Lisbon. The ceremonies at Vila Real included a visit by the both the National Secretary of Education and Innovation, and by the National Secretary of the Environment. The Headmistress of Diogo Cao School gave an overview of GLOBE in Portuguese schools and its importance to the school system (school selection, teacher training, establishment of the school teams, curriculum integration, etc.), since its starting point in Portugal in October 1996. Another highlight of the ceremony was a video and data show by Portugal's GLOBE Country Coordinator, Isabel Raposo.

The GLOBE ceremony held simultaneously in Lisbon was as equally exciting as the one held in Vila Real! The celebration included a presentation by senior meteorologist of Portugal's national Institute of Meteorology titled, "The Global Importance of the Study of the Atmosphere/Climate." As part of this presentation, weather reports were presented from Portuguese towns where GLOBE schools are located.