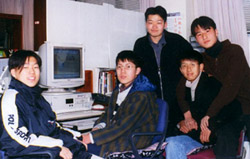 Students at Pusan Science High School are using their GLOBE data to learn more about local environmental conditions and to raise the environmental awareness of students throughout their city, the second largest in Korea. Since January 1997, the students have reported nearly 2,000 observations spanning all the GLOBE measurement areas.

GLOBE Teacher Kim Young Lar reports that his students decided to create a GLOBE Club and divided responsibilities among two groups of students. One group of students focused their studies on a nearby stream, making regular GLOBE hydrology measurements of alkalinity, dissolved oxygen, pH, and temperature. The other group conducted an intensive atmosphere study of the effects of dust near subway stations, around underground shopping areas, and in their schools. Each group then wrote research papers and presented findings at the annual school science fair.

In February 1999, the Pusan GLOBE Students also displayed pictures and information about the data they collected at a school exhibition. "The event was a good chance to inform all the students who came to the exhibition about the GLOBE Program," Mr. Kim reported. "Especially simple and interesting experiments involved in GLOBE activities gave them a strong impression."