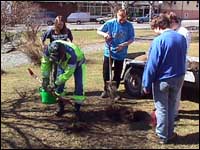 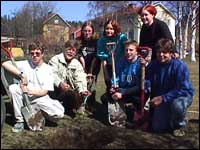 In the northern region of Sweden, GLOBE students are participating in a special study that will help scientists track the growing season at high latitudes. Students at Malgomajskolan in the city of Vilhelmina are monitoring a special lilac they planted last spring as part of a study being conducted by Professor Mark Schwartz from the University of Wisconsin-Milwaukee, a world expert in plant phenology. For over 40 years, scientists have been tracking the budburst dates of a specific species of lilac plants as part of climate research studies. These cloned plants are genetically identical and respond the same to changes in moisture and temperature. Therefore, variations observed in budburst dates be clearly linked to climate rather than to variations between plants.

According to GLOBE Teacher Kurt Andersson, the students were eager to participate in this special study because they wanted to know how this type of lilac would manage in their cold climate and they were interested in comparing their results with those of other schools in other climates. Reporters from a local newspaper, Vdsterbottens Kuriren, attended a special ceremony when the students planted the lilac. "Since the same type of plant will be (studied) all over the world, the environmental effects - like the green house - effect can be registered," Mr. Andersson told local reporters. By collecting data in all the protocol areas - atmosphere, hydrology, land cover, and soils - these students are making a real contribution to the GLOBE data archive and to Professor Schwartz's study.