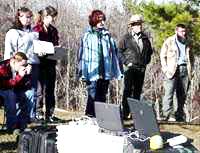 GLOBE schools at the far reaches of the western and eastern regions of the United States are linking up in a cross-country study of local biomes. Using the GLOBE protocols as their guide and Internet and satellite technologies as their link, students from Kingsburg High School in California conducted field experiments and gathered data from sites in Yosemite National Park while GLOBE Students from Pikeview High School collected field data from Pipestem State Park. 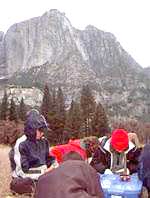 In addition to conducting the GLOBE atmosphere, hydrology, land cover and soils protocols, the students used hand-held Alta spectrometers to record reflectance from soil, snow, dead leaves and vegetation that will be compared with satellite images back at their school's computer lab. Park rangers expressed their appreciation to the students, commended them on contributing to the understanding and long-term well being of the parks, and expressed excitement about working with groups of student scientists in the future.

The project was coordinated by a number of organizations including the West Virginia GLOBE Franchise Blue Ice International, the Fresno GLOBE Franchise in California and the Yosemite Institute. Education offices at NASA's Goddard Space Flight Center and the Ames Research Center supported the project with satellite communications, network services, and technical support. NASA has created a special website to capture the events of the week and the continuing collaboration of the schools at: http://education.gsfc.nasa.gov/yosemite99/