Young GLOBE Teachers Take Off with Hands On 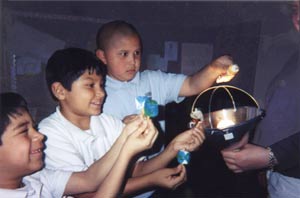 A trio of GLOBE teachers, just completing their student-teaching stints, may be revolutionizing science education in a corner of the country.

Tina Allen, Jenifer Burnes and Jesus Sustaita are keenly motivated to spark interest in science and technology in their home of Yakima Valley in eastern Washington. It is a rural area with high minority and migrant populations, where schools have few resources and where Bill Gates and the technology centers on the other side of the mountains in Seattle seem a world away.

To accomplish their goal, these three, while still college students, developed a GLOBE-based practicum for pre-service teachers at Heritage College in Toppenish, WA.

These young teachers say they know it will take time and money to help local schools get equipment such as computers that they now lack. But children even in the poorest schools respond to the protocols and learning activities of GLOBE, they say.

"By the end of the semester, kids started to believe they are scientists," said Ms. Burnes of her practice-teaching experience. "And that's what we wanted."

At Heritage, these three young adults took a science course based on the GLOBE program, taught in the science department. That inspired them to develop a practicum - an education-department course that includes "practice teaching" in the field - also based on GLOBE. Their efforts led to "Ed 403: Advanced Science Methods," which has attracted a lot of education students and earned the interest of nearby schools. (Although the three are all elementary-school teachers, the practicum has since attracted pre-service teachers for all levels.) 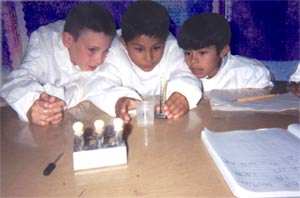 As part of the practicum course, pre-service teachers work in local schools. The first group taught during the school year and at summer science enrichment programs at several schools. More schools are asking for the GLOBE practice teachers, and as more students take Ed 403 at Heritage, the program will likely expand, according to Pat Falco, Adjunct Professor of Biology and Environmental Science, who teaches the GLOBE-based science course at Heritage.

"I think GLOBE will be the basis of the curriculum for most of the schools here as our students go into the field," Ms. Falco said. "That's already happening."

Heritage College sits on the Yakama Reservation; "Toppenish" means "sloping" in Sahaptin, the Yakama language. The college has as part of its mission to provide higher-education opportunities to the people in the area. Ms. Allen, of Yakama Nation heritage and Mr. Sustaita, of Hispanic heritage, reflect in part much of the make-up of their alma mater's student body.

Many Heritage must work, so students are unlikely to go far from home to attend college.The school provides flexible schedules. The education department -- also a local GLOBE Partner -- is the largest department there, and most of its students are very interested in serving local communities. Heritage trains a large number of students in teaching English as a Second Language (ESL), many who are bi-lingual not only in Spanish and English but also in Sahaptin and English.

The combination of having GLOBE in a science course and taking the advanced science-education course developed by Ms. Allen, Ms. Burnes and Mr. Sustaita "is a joint project between the science and education departments to make better science educators," said Pam Root, Assistant Professor of Education and Psychology at Heritage College. "Like GLOBE, we're trying to use good science and good teaching methods. First we prepare them well in content; then we teach them how to teach well."

Ms. Root added that reaching pre-service teachers is proving to be more effective than trying to entice in-service teachers to GLOBE. Heritage students understand local needs because they're still tied to the area, and because Heritage addresses all-too-common education challenges like how to reach kids who can't read. Plus, they're attracted to GLOBE.

"They've learned GLOBE and they understand how to integrate it because we've integrated it with reading, for example," Ms. Root said. "They're excited about it. GLOBE matches their own appreciation of how to learn."

That's exactly what Mr. Sustaita says. "Hands-on, that's what I like about GLOBE. I know I learn that way," he said. "Especially at a young age, students like to feel and see things, to pour water. And they like to talk about it. Kids don't have a great attention span, but hands-on keeps them focused. You can get them excited if you get their attention, and as a teacher you always have to keep it exciting."

These young teachers also say that GLOBE's framework makes it easier for them to adapt it to any level or even any subject. That is why they want to teach teachers as well as teach kids through GLOBE.

"GLOBE is a really good way of teaching science to students because you can take it down to any level, adapt it to any age group, even kindergarten," said Ms. Burnes.

Ms. Allen agreed, and noted that GLOBE is useful in teaching other subjects as well, including math, writing, and ESL. "When we taught ESL to farm workers, many of them had very little schooling, maybe to first grade or sixth grade," she said. But hands-on activities from GLOBE were interesting to them and good practice, she said.