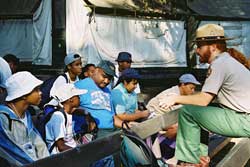 Although many of the students had not ventured far from their urban homes before, they excitedly trekked along hikes in the steep, rough terrain of the Sierra Nevada. The students say they didn't mind the effort and days-end exhaustion. They were often amazed at the scenic views, the stately redwoods, the dry creek beds, and, as one student put it, the "serenity and peace" of the Yosemite trails.

"We hiked to Mirror Lake [where] we found out there was no water. It was just an open area filled with sand," reported Ivanna. Not too far up that trail, however, the students did find some water in which to take their hydrology measurements. They also found the mountain stream much colder and clearer than what they were used to studying in Louisiana. 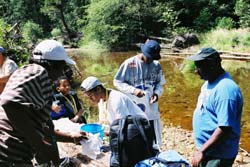 Other students said they would never forget the spectacular views at Cathedral Lake, where they performed the GLOBE atmosphere protocols, including the new aerosol and ozone measurements. Many of the students were surprised to find that, although the sky looked clear, the ozone concentration in the air was relatively high.

The students also followed the GLOBE land cover protocols and looked at LandSat images of a small part of Yosemite to make maps of the area.

The students were met along the way by Lt. Col. Timothy Rainey, a professor of history from the U.S. Military Academy at West Point who specializes in the history of the Buffalo Soldiers, and Park Ranger Shelton Johnson, who appears in period costume and further explains the experience of the soldiers.

"I spent a lot of time fielding questions after my lecture," Rainey said. "The students were very inquisitive. They had a lot of knowledge, too, so they had very informed questions." 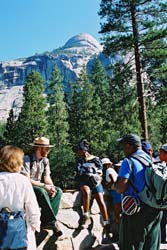 The Buffalo Soldiers, so nicknamed by Native Americans because they displayed a tenacity that reminded them of the buffalo that roamed the plain, were African-American cavalry regiments assigned the rough jobs of protecting wagon trains, railroad workers and homesteaders, according to Lt. Col. Rainey.

Many of them had served in the Union Army during the Civil War. These all-black infantry and cavalry regiments served in the United States Army until 1946, when African-Americans were integrated into all regiments, Rainey said. Less well known were the soldiers' park management duties in areas of Yosemite. They were responsible for mapping out huge tracts of the park. They also protected the public lands from unlawful exploitation by ranchers and outlaws.

"They were always improving their maps," Johnson said. "They were constantly dealing with controversy regarding the federal lands. It wasn't just what you call 'ground-truthing.' It was also cultural-truthing, getting people to understand this is federal land, that there's no hunting allowed for example."

Johnson said that the soldiers met with resistance from people who weren't used to taking orders from people of color. "But ultimately, they were the United States Army and were empowered to do what they needed to do," he said. "People saw the stripes on the uniform."