Under a bright green jungle canopy and the watchful gazes of a tree snake and tiny, shy monkeys, 38 teachers, members of local volunteer groups, and government officials augured soil samples along the banks of a rainforest stream in Panama, Central America. 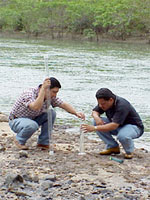 At one point, a curious coatimundi padded by to watch these participants in a GLOBE International Training workshop. Teams of GLOBE trainees took hydrology samples amid the splashes and shouts of adolescent boys playing water soccer in a mangrove inlet. Overhead, cloud shapes and cloud cover changed quickly - more than once triggering a drenching downpour - as the trainees honed their atmosphere protocol skills.

Despite high temperatures and long days, every participant in this workshop chose to stay the extra days necessary to complete the advanced protocol training. In another valuable resource that gave the Program a quick start in Panama, the US Peace Corps invited participants to make use of its in-country Volunteers as aides in teacher training. 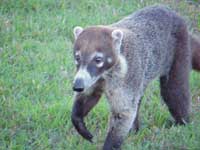 "I think it is a very good experience and it provided an opportunity for all the participants to develop strong relationships, to get to know each other and to work together for a single goal - that is, a healthy planet," said Country Coordinator Leopoldo M. Munoz, Director of Environmental Education for MEDUC, Panama's Ministry of Education. "In addition, the GLOBE methodology is very practical, it's deep, it's agreeable, and students will enjoy the protocols and the experiences."

The workshop was held in a sprawling complex of adobe and terra cotta tiled buildings that were part of an US Air Force Base before Panama took over the Canal and its infrastructure in 1999. Wildlife there has flourished in the relative quiet since the base is used mainly to house Panama's Civil Patrol and for classroom facilities for various trainings such as this GLOBE workshop.

"It's a magnificent opportunity for two reasons; the form and methods to improve science classes in Panama (where) many of the classes are very theoretical and the children aren't that interested. But with GLOBE they go into the countryside and really get to know how the natural world works," said Klever De Lora, Director of Promoting Culture for AnAm, Panama's air quality agency.

"And there are the opportunities for children to have relationships through technology with other people and to be able to talk with scientists in other parts of the world," De Lora continued. "It's a global idea: we are not separate, isolated countries. It will serve us as a country as well because we'll learn that Panama is a country in transition that depends on technology and GLOBE will help."