Gary Campbell's Marana High School students demonstrate that a desert is anything but deserted. In fact, some deserts are getting relatively crowded. That's in part what Campbell's GLOBE class juniors and seniors found out when they recently completed a 100-square mile land cover project in the southern Arizona desert. Noting their skills, the town of Marana has asked the students to use their remote sensing and "ground-truthing" skills to help officials with two projects: development of a pedestrian-and-bike path system near local schools and an analysis of bus routes.

Kevin Sweeney, the Geographic Information Systems (GIS) Manager of Development Services for the town of Marana, said he had heard of Campbell's students' land cover work at a local rotary club meeting. (As you know, GIS software takes the age-old art of making maps and adds the ability to include other important information such as traffic patterns.) 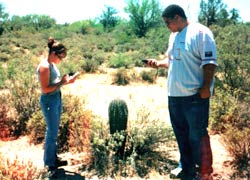 Sweeney said he is excited to be getting help from the GLOBE students. "This is a high-growth community, so we're under pressure to determine what the safest locations are so kids can walk or ride their bikes to school," Sweeney said. "The town's put a lot of effort into acquiring photo imagery, but there's quite a bit of data collection needed."

As they have in their GLOBE studies, the students will be using satellite photos, Global Positioning System (GPS) units, and observation skills to help determine the best routes for the pedestrian/bike paths and for the bus routes and stops. The project will involve new types of "ground-truthing" skills, as students assess traffic and pedestrian patterns to, from and around school campuses. The bus project will involve more network analysis using GIS software, applying research into student addresses, distances, and speed limits.

Campbell started using land cover/biology and GIS software just last year. He built a high-level science research class from GLOBE activities, emphasizing accuracy and consistency of data collection. Marana students had been collecting soil and atmosphere data and using GLOBE web site data for a while, but last year they added a significant amount of land cover/biology information. They mapped out or "MUCed" a 10 mile by 10 mile area, with the school in the center. The area encompassed mostly semi-arid desert and farmlands, and, of course, the development that has recently sprouted there. [The GLOBE Program uses the Modified UNESCO Classification (MUC) System for classifying land cover types, from flora to urban jungle.]

Larry Ryan, GLOBE Land Cover/Biology Research Associate Scientist at the University of New Hampshire, said the students' work is important to many people. Developing their land cover map was an excellent learning activity for the students, and it provided a wealth of information for students and scientists to access from the GLOBE web site, Ryan noted.

"In addition to being an excellent learning situation, this map now provides an opportunity to examine changes that occurred in Gary's area over years," Ryan said. "His first map was done with an image from the early 1990's. We will now supply him with a new image, and his students will repeat the process to examine the changes in land cover types during the period between the images."

An accurate land cover map can help land-use planners, who are especially busy in fast-growing areas like Marana, Ryan said. And, of course, the students' town planners have already tapped them for their skills.

Teacher Campbell believes the value that Sweeney and Ryan are putting on his students' work helps the students in many ways, too. "The kids learn how to use the equipment, do research, process the data, write up the results, and know what they did was useful and valuable," Campbell said. "In addition, I hope they are exposed to new and valuable vocational situations that might prove of high future interest, no matter the level of education they complete."