Where in the world are those other GLOBE students? That's the question three groups of students had about each other. They had to locate other GLOBE schools armed with just a handful of clues, including GLOBE data.

The fun began when three GLOBE teachers met during a training session and devised a project to have their students use GLOBE data in an exciting way: guided by their respective teachers, students at each school put together a "Mystery Box," providing clues about themselves for the other, unknown GLOBE classes. Each class devised a different way to provide clues. 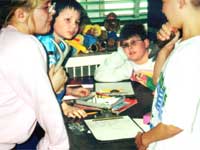 Scott Lobdell's 5th grade at Fair Haven Grade School in Fair Haven, Vermont, provided longitude and latitude, some information describing their state and town (but not the names) and rain and temperature readings. "My students had a blast with it," Mr. Lobdell said. "Our approach was a way to combine social studies and science."

The clues from Jim Lane's 4th grade at Charles B. Murray Elementary School in Sheridan, MT included horns, skin and hair from elk, moose, deer, snakes, buffalo and other animals native to that area. He also turned GLOBE data into math problems. For example, when the other schools' students solved the math problem, they had in hand the longitude and latitude of their colleagues' school. "They also included a lot of names of rivers and mountains, so there were a lot of map skills for my students," Mr. Lobdell said of the Sheridan Mystery Box. 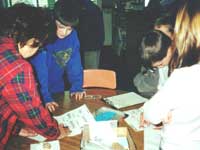 The third hidden group was Carol Boyce's after-school GLOBE club with 3rd- , 4th- , and 5th-graders at Orange Elementary School in Waterloo, IA. Their mystery box included a lot of GLOBE data, including average minimum and maximum temperatures for each of the four seasons, altitude, and some graphs. They also included the state rock, and following Mr. Lane's example, turned some data sets into math problems. Orange Elementary divided their clues into "difficult," "medium," and "easy," and asked the teacher to dole out the most difficult questions first.

Once the clues were assembled, two sets of Mystery Boxes were sent, one to each of the other schools.

"The clues were difficult until we arrived and saw the box's pictures of bitterroot and meadowlarks. Then it started to fit into place," wrote Jonathan, an Orange Elementary 4th-grader, to Mr. Lane's class.

Although geographically quite far apart, the exercise drew the children closer. After the Mystery Boxes were solved, the classes exchanged videotaped "hellos" so they could "meet," and many students exchanged letters. The teachers, who are interested in doing the exercise again, believe it would work even better if there were more participants.

Ms. Boyce said the search for clues involved a lot of research, using the GLOBE web site and other Internet sources, as well as more traditional reference materials. "It was a wonderful project," she said. "It was so fun and our kids learned so much."

Mr. Lobdell agreed, adding that the students had to use critical thinking skills to decipher the boxes. In fact, the teachers all said the project reflected many of GLOBE's educational goals and educational ideals in general.

"This was a really good research project, not only to figure out the others' boxes but also to prepare the boxes to send," Mr. Lane said. "To be effective, education is not going to be just typical classroom work. We're a little school in a little town out in the middle of nowhere and we have to get out. That's where you get the learning done, and that's why I like GLOBE."

The search also turned up differences in GLOBE schools' hometowns. Rural Sheridan, MT, doesn't have a single stoplight in town. "Why don't you have any stoplights?" wrote Waterloo 3rd-grader Nicole to one of Mr. Lane's students, once the mysteries were solved. "I mean, we have stoplights almost on every corner!"

Teachers interested in finding out how to do a similar Mystery Box exchange can email Carol Boyce (cboyce81@hotmail.com), Jim Lane (jimlane@3rivers.net) or Scott Lobdell (slobdell@fairhaven.k12.vt.us).