Payback Time for Students in Waynesboro 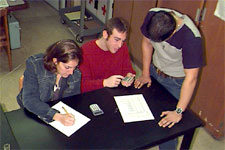 Students at the Waynesboro (PA) Area High School once turned to local businesses and government offices for help in buying the instruments and other equipment they needed to participate in GLOBE. Now those same institutions benefit from daily weather information that Waynesboro students supply. 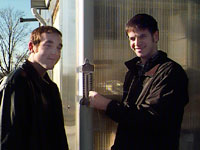 The paper, the Record-Herald, calls on teacher Todd Toth's students for stories. "We're in a drought emergency and we're supposed to be conserving 25 percent of our water," says reporter Lynne Newman. "What I'm doing is trying to explain to the community what our weather situation is - the amount of rainfall we're getting compared to a year ago, how far the deficit is. I'm usually writing a story about the drought or related stories, like how far down our reservoir is. In order to understand, we have to know how much rain we've had or haven't had. Todd's classes provide many of the statistics that I use."

Newman said Toth's classes have also been able to give her information comparing today's rainfall and temperature patterns with that from two years ago and from 100 years ago. 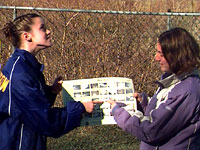 In fact, the Waynesboro students have expanded their atmosphere studies to include a climatology project comparing temperatures and rainfall from 100 years back. Although there is a drought now, and the perception is that the weather's getting warmer, average temperatures stayed within one degree over the past 106 years. And the precipitation has actually gone up, the students have found. "This past year we were 20 inches short, but we found that precipitation has gone up 5 inches over the past 106 years," Toth says.

The students are comparing 2001 precipitation data with statistics from 10, 25, 50 and 106 years ago, using data from the National Weather Service and the State College of Pennsylvania. They use their own GLOBE data for comparisons with more recent years. 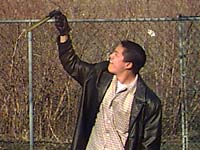 The students have found that their local climate is more like that found a little farther south than the climate of their own immediate area. Their theory is that three sets of mountains to their west puts them in a pocket where they don't get weather moving west to east, but they do catch the winds and weather from the south.

"I once did a story about [the GLOBE students]," says reporter Newman. "The kids took me out to where they measure the rain and measure the wind. They really know what they're talking about."