GLOBE at the World Space Congress 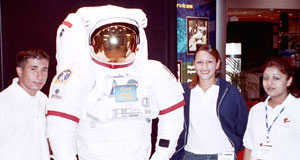 Thanks to the GLOBE program, some young scholars recently learned that studying science can really take them places. In October 2002, six students and two teachers from two GLOBE schools traveled to Houston, Texas, to participate in the World Space Congress (WSC), an event organizers describe as the largest scientific, technical and space exhibition of the decade.

"Two of my students had never flown or been in a taxi, so this trip was full of 'firsts' for them," Gilbert said. 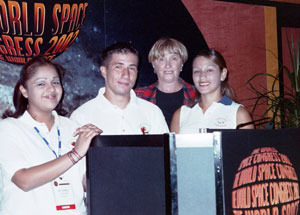 The highlight of the students' experience was the live NASA webcast. Before WSC attendees and a wider web audience, they demonstrated GLOBE activities such as measuring haze, surface ozone, atmosphere and Land Cover protocols. The students used Multispec and other GLOBE tools and took questions from the WSC audience as well as others submitted via the Internet.

"It was so gratifying to see one of my students - who in the classroom setting [doesn't always do well] - really shine during the GLOBE webcast," Gilbert said.

All six students discussed how GLOBE made science more interesting and more interactive. Some said their hands-on GLOBE experiences were leading them to explore careers in the sciences and engineering. One of the New York students, for example, said she is now pursuing a science-education degree at the college level, thanks to her GLOBE experience in high school.

"It was inspiring to me to hear how excited these kids are about GLOBE and to see the positive effect it is having on their school experience and their plans for the future," said David H. Brown, GLOBE's Director for Systems.

The students also worked the GLOBE exhibit booth, located in the "Education Alley" of the huge WSC Exhibit Hall. The GLOBE booth was heavily visited by scientists and space officials from both government and industry from around the world. GLOBE Deputy Director Lyn Wigbels was gratified to note that "so many people who had already heard about GLOBE dropped by, as well many who were new to the program and very interested in getting involved."

Teacher Gilbert was pleased that his students were able to focus, surrounded as they were by hundreds of exhibitions showcasing "actual space suits, multi-jointed deep sea suits, orbiting power modules, flight simulators and NASA in general." But they stayed with the program, and for their efforts, they were rewarded some free time spent around the exhibit hall and came back with more hands-on learning: bags overflowing with exhibit goodies.