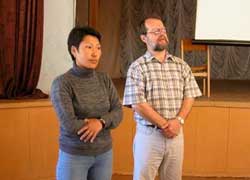 From July 5 -13, GLOBE and UNESCO jointly sponsored a Train-the-Trainer workshop on the shores of Lake Baikal, Russia. The workshop was located in the village of Goryachinsk, about 4 hours from the Buryat capital of Ulan Ude on the eastern side of Lake Baikal. Participants arrived from both the eastern and western sides of the lake, and even included the Country Coordinator for Liechtenstein (Europe) and three South Korean teachers, who made the long journey to this beautiful, yet remote, site. 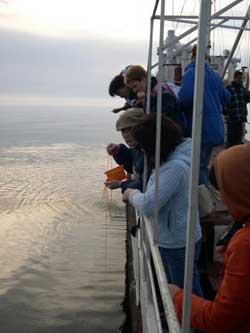 Lake Baikal's transparency has been measured up to 40m deep! Can you imagine the number of transparency tubes it would take? (Oh, that's right, we'd use the secchi disk, with an extra long rope). Our results were quite a bit less, possibly due to it being overcast and peak growing season.

Dr. Feodor Surkov, Country Coordinator for Russia, was pleased to announce that Dr. Tatyana Badlueva, of the Buryatski Teacher Training Institute, was named a co-coordinator for the Baikal region. Because of Russia's enormous size, the responsibilities of managing GLOBE in Russia are more easily met with several co-coordinators. Another outcome of this training workshop was that two Russian trainers, Natasha Petkova (Soil) and Olga Zhilevich (Hydrology), successfully completed the lengthy and challenging process to become Master Trainers. 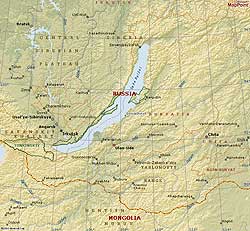 All of the participants were pleased to have the training on the shores of Lake Baikal. Lake Baikal is both included in UNESCO's World Natural Heritage Program and considered by Russia to be one of the "gems of Russia." You may be aware that Lake Baikal contains 20% of the world's fresh water-more water than all of the American Great Lakes combined! Although the Great Lakes may be larger in surface area, Lake Baikal's deepest point is 1,637m, or over 5,000 feet deep! The region is highly valued because approximately 80 percent of the 2,630 plant and animal species and subspecies in the lake area exist nowhere else on Earth. One rare species on Lake Baikal is the freshwater seal. 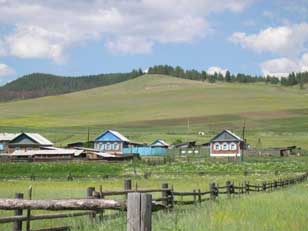 A village located south of Lake Baikal where the Mongolian steppe ends.

Besides the natural beauty, this area is well known historically and culturally for being the birthplace of the Mongolian ruler, Genghis Khan. The Republic of Buryatia borders Mongolia and the connections between cultures are very strong. Buryats maintain a language that is very similar to Mongolian in addition to Russian and also share the same religion. Buryatia is the center of Buddhism in Russia. Buddhist temples and Russian Orthodox monasteries dot the northern steppe landscape of Buryatia. 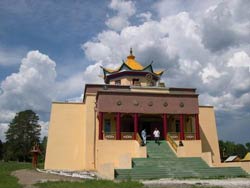 Buddhist temple in the area.

Other special events surrounding the workshop included a boat tour of Lake Baikal, several evening bonfires watching the sun set over Lake Baikal, and a tour of a local nature museum. Many participants fondly recall the graduation banquet where Dietmar Possner, Country Coordinator of GLOBE Liechtenstein, presented a truly international toast that was translated from German to English to Russian, to Buryat, and finally to Korean. The toast consisted of three wishes: "I wish that everyone has a dream, and that you are able to work towards that dream, and finally, that you may realize this dream."