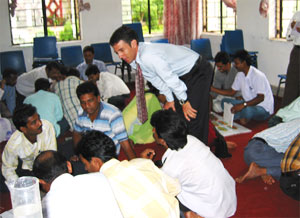 U.S. GLOBE Partner, Mr. Henry Ortiz of the Los Angeles Unified School District in California, led a series of lectures and informal discussions on ways to prepare environmental education curricula and to increase the efficacy of science teaching. The lectures were sponsored by the U.S. Consulate General in Mumbai, India and took place between 6 - 11 August 2006. Over 250 faculty members, administrators, NGO representatives and students from Pune and Mumbai attended the lecture series.

Mr. Ortiz, a GLOBE Master Trainer, discussed the cooperative partnerships that the Los Angeles school district has undertaken and suggested ways that Indian schools could increase their reach with similar partnerships in India. He demonstrated classroom techniques that help make abstract scientific principles concrete. His lecture series underscored the need to employ specific applications and experiments to impart a solid understanding of concepts. Mr. Ortiz emphasized that rote memorization of definitions may lead to adequate test scores but does not ensure real comprehension. Hands-on learning is key.

Mr. Ortiz presented the GLOBE Earth as a System Learning Activity as part of his lecture series and conducted a hydrology investigation with participants on the Ganges River in the city of Kanpur located in Northern India.

The Public Affairs Section of the U.S. Consulate General was able to share modern American pedagogical techniques with science educators while the American Information Resource Centers in India also supported the program with a detailed info pack. The science demonstrations of Mr. Ortiz were widely appreciated by the audience and many of the participating institutions are now motivated to include inquiry-based, hands-on teaching methods. They also expressed interest in joining the GLOBE Program.