The Intergovernmental Panel on Climate Change (IPCC) has reported that "Africa is one of the most vulnerable continents to climate change and climate variability" and warns that higher temperatures caused by climate change will depress crop yields there, and in many parts of the world, over the coming decades. In Cameroon, GLOBE Alumni Network member Tamsu Fogue Marcelin and GLOBE students of the Lycee Technique Industriel and Commercial of Bafoussam are investigating this issue, focusing on the corn crop of the West province of the country. There, where the economy is primarily agrarian, corn is the principal crop and is used for local consumption and for export to other provinces in Cameroon. Tamsu's project, titled Impact du Rechauffement de la Planete Sur La Province Ouest du Cameroun or Impact of Global Warming on the Western Province of Cameroon, was initiated in April 2007, although Tamsu says, "the project was the result of many years of observation." 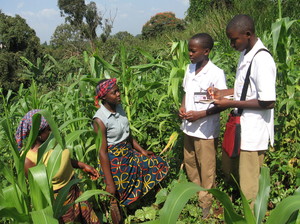 Tamsu and the GLOBE students began collecting measurements in 2001 using GLOBE instruments and atmosphere protocols, recording the data into the GLOBE Web site and applying their findings to research about climate change. The climate in this region is characterized by a short dry season from November/December to mid-March, followed by a longer wet season from mid-March to October. In recent years, Tamsu has been noting decreased rainfall levels, decreased humidity levels and increased temperatures, all having a noticeable effect on the growth of the corn, which requires three full months of adequate rain to fully ripen. 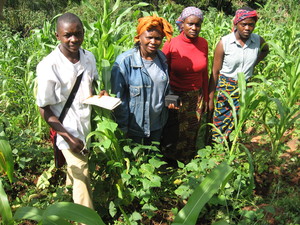 By examining environmental factors in his homeland, where the economy is based on subsistence farming, Tamsu is finding reason for concern. Though humans continue to develop technological advances that help to increase crop yield, the fundamental elements of crop growth are solar radiation, temperature, and precipitation. Tamsu Marcelin and GLOBE students in Cameroon have begun to raise local and regional awareness about climate variability and how change may significantly affect the growing cycle and, as a consequence, the local economy and well-being of the people. Their efforts inspire all of us to learn more about the environment in which we live and to employ local-level analyses of interacting factors when researching complex environmental issues. By working together, they teach us to establish and nurture partnerships and collaborations that will enable us to act incisively on increasingly complex issues related to climate change.

To read Tamsu's full report, in French, click on the Français link at the top of this article.