GLOBE Students in France and the U.S. Meet via Video Conferences

GLOBE students at Felten Middle School in Hays, Kansas have been learning a lot about GLOBE's hands-on activities and international collaboration in space science. They have been focusing on CALIPSO (Cloud-Aerosol Lidar and Infrared pathfinder Satellite Observation), a satellite launched from Vandenberg Air Force Base in Lompoc, CA on 28 April 2006, a joint effort of NASA in the U.S. and CNES (the Centre National d'Etudes Spatiales) in France. Now one year into its 3-year mission, CALIPSO is helping scientists learn more about how clouds and aerosols play a part in regulating the Earth's weather, climate and air quality. To prepare his students to participate in the CALIPSO project, GLOBE teacher Mr. T.J. Trout has been introducing his students to GLOBE protocols since the beginning of the school year. On a daily basis, his students have been collecting and reporting GLOBE data, including Air Temperature, Cloud and Contrail Observations, Precipitation, Aerosol and Water Vapor observations. Across the world, in Mouans Sartoux, France, students at the Collège "La Chênaie" have also been taking measurements and reporting their data. 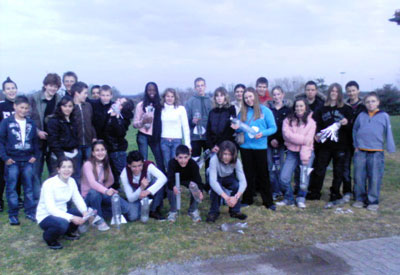 Dr. Paul Adams, a GLOBE Partner and director of Fort Hays State University Science and Math Education Center in Hays, Kansas, had traveled to France in his capacity as CALIPSO Outreach Instructor where he began to contact GLOBE teachers in France about the possibility of future collaborations. For the past three summers, teachers from France have also attended week-long CALIPSO/ CloudSat /GLOBE trainings and CALIPSO /CloudSat launch events under the auspices of the CALISPH'AIR Project. During one of his summer GLOBE teacher workshops, Dr. Adams met Mr. Trout, a science teacher at Felten Middle School in Hays, Kansas. The two educators discussed the value of connecting French and American students through the study of the ambitious satellite project launched by the two countries. Dr. Adams introduced, to Mr. Trout, GLOBE teacher Ms. Vanessa Magro at Collège "La Chênaie" in Mouans Sartoux, France, whose students also were collecting and reporting GLOBE data. Together they began the process of setting up a global video conference involving his students in the U.S. and her students in France. 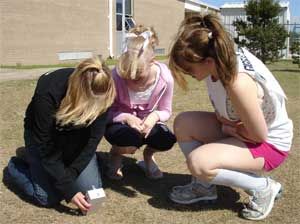 Dr. Dianne Robinson, a GLOBE U.S. Partner, atmospheric science professor at Hampton University in Hampton, VA, and Educational Outreach director for CALIPSO, along with scientists from CNES, joined in. The video conference was held in English with English to French translation provided by Dr. Sandra Milburn of Hampton University.

A second video conference was held on 11 May for students at the high school level. Hays High School teacher Ms. Cheryl Shepherd-Adams, Mr. Michel Pedurand of the Lycée Bernard Palissy in Agen, France, and officials of Hampton University organized the event. Dr. M. Patrick McCormick, co-principal investigator for CALIPSO, Dr. Dianne Robinson, Dr. Danielle DeStaerke, CNES translator and GLOBE France Country Coordinator, and Dr. Adams of Fort Hays State University joined in. The students heard a presentation about the CALIPSO mission by Dr. McCormick and both classes asked questions about the mission and the importance of collecting aerosol data using the GLOBE Protocols. Following the science portion, the students were able to discuss and ask each other questions about cultural differences between France and the U.S.

A third conference took place on 11 May, between Ms. Kathy Rome's students at Otis-Bison Middle School, Bison, Kansas, Ms. Virginie Godechoul and Mr. Mehdi Rajade's students from Collège André Lahayel in Andernos-Les-Bains, France and Dr. Adams of Fort Hays State University in Kansas. The webcam conference focused on discussing GLOBE measurements, geography, and climate differences. One very interesting aspect of this session was the discussion of the Greensburg, Kansas tornado. The Kansas students grew up learning about tornados and tornado safety. The French students indicated that they have no comparable weather phenomena that occur with the frequency of tornadoes in Kansas. This webcam session went for one hour. Ms. Rome, Ms. Godechoul, and Mr. Rajade also had the opportunity to meet face-to-face during the AIM/CLOUDSAT/GLOBE workshop held in Alaska in June 2007.

All three video and webcam conferences proved to be successful components of the larger effort to engage students internationally in the outreach of the CALIPSO/Calipsh'Air satellite mission through its GLOBE connections and of Fort Hays State University's commitment to internationalize their own work and efforts. Said teacher Mr. Trout of the his GLOBE students' growing awareness of the connection between the science that they are investigating in their schoolyards and the science that scientists are doing in space, "This puts an application to science and lets students see that science crosses earth science, chemistry, physics and that science isn't just an individual topic. This way, they see that it's being used somewhere in the science field or community, and they're actually contributing to something. It gives them more of a look at the big picture."