On 4 June 2007, GLOBE Israel hosted its Annual Conference in Bet-Shearim, Galilee in the North of Israel. More than 650 students and teachers from across the country attended to celebrate "GLOBE Day." GLOBE Israel Country Coordinator, Mr. Farid Hamdan of the Ministry of Education, reports, "GLOBE Day is very special in Israel because it unites students from so many different sectors." Jewish, Arab and Bedouin participants gathered from elementary, junior, and high schools all across the country to participate in the event. U.S. Embassy representatives Mr. Leslie Smith, Department of Public Affairs, and Research Scientist Mrs. Rhonda Brown, along with the Mayor of Kiryat Tivon Town provided valuable assistance and helped make the celebration a huge success.

Prior to the Annual Conference, students at GLOBE schools had conducted scientific investigations on the theme, "Energy: the Resource in your Close Environment." Five schools received awards on the basis of their practical solutions to save energy and enhance the use of green energy resources. During the conference, teams of students presented the GLOBE data they had compiled over the year. There was excitement in the air as students enjoyed competing for prizes by racing to compute data and enter it into the GLOBE Web site. Students from Sachnin Junior High School received the top prize, followed in second place by Neve Shalom Junior High School. Younger students from Ramon Elementary School, in Mittspe Ramon, received the third place prize. 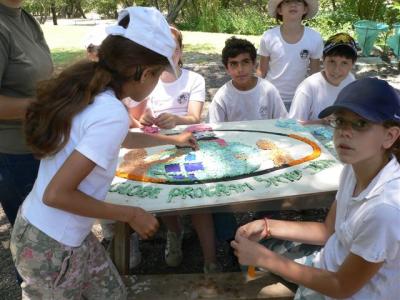 A primary emphasis of the event was on expanding student knowledge of GLOBE protocols. At the end of the day, individual students competed in the "GLOBE Quiz" in which questions related to Atmosphere, Hydrology, Ecology, and Phenology were asked of the students. Two students from Eroni Yud Bet High School took the first and second places, followed in third by a student from Modiin High School. Congratulations to these and all students, their teachers, and all event coordinators for taking part in GLOBE Day at this year's GLOBE Israel Annual Conference!