Learning the unique cultural complexities of indigenous people and incorporating them into GLOBE training and resources is a challenge for many GLOBE communities around the world. New Zealand Country Coordinators Kathryn Hicks and Aaron Fleming have been doing just that. Through the Environmental Monitoring and Action Project (EMAP), Ms. Hicks and Mr. Fleming have been facilitating an effort to link the traditional values and environmental awareness of Māori, New Zealand's indigenous people, with cutting edge science in order to provide school children with the tools they need to actively learn about, and take responsibility for, the world in which they live. 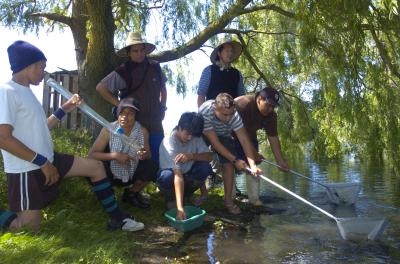 For Māori, and for many indigenous groups including the Native Americans of North America, complex associations with the natural world have developed over many centuries and have social, economic, psychological and spiritual dimensions that underpin their environmental ethos. As such, an understanding of Māori views of the natural world is an important aspect of environmental awareness and education in New Zealand. EMAP is the Royal Society of New Zealand's environmental education program for schools, funded by the New Zealand Ministry of Education, and a GLOBE partner. Primarily focused on waterways monitoring and waterways-based education, EMAP oversees environmental monitoring activities throughout New Zealand and endeavors to bring schools, local authorities, research institutions and others together to allow students to carry out monitoring of their local regions. Through a variety of projects in the schools and community, EMAP and GLOBE hope to foster a desire in children to become guardians of the country's mountains, lakes and rivers. They are attempting to bridge contemporary advances in climate studies with observations that Māori have amassed for generations. 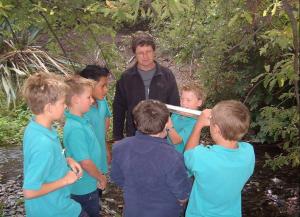 To Māori, the climate was governed by the months and seasons, marked by the local sequence of natural events, including the movements of stars, the blooming of certain trees and flowers, the arrival and departure of migratory birds, and the phases of the moon. Over centuries, Māori have developed an extensive knowledge of climate, and the lessons acquired have been incorporated into traditional and modern practices of agriculture, fishing, medicine, education, and conservation.

GLOBE New Zealand is beginning to explore traditional Māori knowledge of weather to study climate change. Initial work in New Zealand on this topic was conducted by The National Institute of Water & Atmosphere's (NIWA) Māori Research and Development Group, Te Kūwaha o Taihoro Nukurangi, in collaboration with iwi (tribes) from across New Zealand. To further support Māori in New Zealand, GLOBE New Zealand has reproduced many resources including the cloud chart and hydrology resources, and translated them into Te Reo Māori – the language of the indigenous people. This exciting development has been welcomed in schools throughout the country, for providing bilingual resources with the indigenous language included. 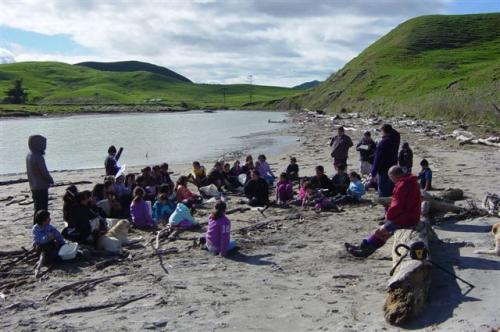 Students at Whangara School are involved in a catchment-based teaching programme with the assistance of local Whitebait Connection and EMAP regional co-ordinator, Murray Palmer. The project, Te Awa Ora Waiomoko, focuses on developing an understanding of the ecology of the Waiomoko River. Through research and an interdisciplinary curriculum, students and teachers observe the coastal environment as a whole system, looking at land use, erosion and other local factors in order to encourage protection of this valuable local resource. Students at Whangara School are also part of an action project to reintroduce native plants. Teachers there have developed an integrated approach to this planting project, using science, math, social studies, art, Māori and English curricula using traditional and contemporary knowledge, drawing on past and the present wisdom, to engage New Zealand's guardians of the future.

For more information about the Environmental Monitoring and Action Project as the combined delivery of GLOBE and the National Waterways Project please visit the EMAP Web site. Many of the translated resources, along with the quarterly newsletters, are available for download. For more information contact emap@rsnz.org.