On 20 April 2007, over 600 5th - 12th grade students and teachers gathered from 21 Ohio schools to present and showcase their GLOBE research projects at the first annual OhioView SATELLITES Geospatial Technology Conference at the Great Lakes Science Center in Cleveland, Ohio.OhioView, a grassroots organization founded in 1996, promotes the low-cost distribution of U.S. Government satellite data for public use. The organization aims to make geospatial data from the U.S. Government more accessible and to fill the knowledge gap in education about the uses of data. OhioView collaborated with NASA, Ohio Aerospace Institute, and the Great Lakes Science Centerto bring together students from across Northern Ohio to present poster presentations about their research projects which were based on GLOBE data on Surface Temperature, and the International Polar Year. 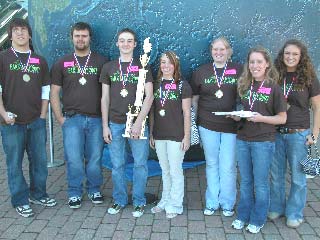 Students not only displayed their own work, but were able to view and discuss the posters and projects of students across the region. A highlight of the conference was the live video conference between students and IPY Scientist from NASA Goddard Space Flight Center, Dr. Claire Parkinson.

Awards were presented to students whose projects showed outstanding merit. Eric Ubelhart, a senior at Orrville High School, won first place for his project entitled "Got Sun?" Ubelhart graphed the correlation between the temperature of the ground and power output of solar panels placed on the ground. Ramone Foster, Denzel Hampton, Eric Wilkes and Emmanual Marrero, students from Martin Luther King Jr. High School, won second place for their project "Effect of Geographic Features on the Temperature of a Place." Michael Nelson, Della Owens, Kailee Flons, Scottie Slauterbeck, and Gabby Oney, from Main Street Elementary School, were awarded third place for their project "What Does the Snow Surface Temperature Have to be to Make a Good Snowfall in Alaska?"

From 18-22 June, 65 student posters from the conference were displayed in the map room of the Ohio Statehouse in Columbus and each winning student received a commendation from the Ohio State House of Representatives. Members of OhioView were on hand at the Statehouse to meet with the public as they viewed the posters. The GLOBE Program Office congratulates these students for their innovative project ideas and wishes them the best of luck as future scientists!