New Face of the National GLOBE GAMES in the Czech Republic

The TEREZA Association is a non-profit, non-governmental organization in the Czech Republic. TEREZA's mission is to encourage and support cooperation and active community participation in renewal and protection of a healthy environment, and thus contribute to the overall development of civic society. Founded in 1979, the organization's original focus was to preserve natural areas of Prague. Ten years later, TEREZA expanded its reach to include the development of environmental education in the Czech Republic, and shortly thereafter, opened the gates to its current headquarters in the heart of Prague. The center is a gathering place for those interested in environmental activities and offers educational programs for students, training courses for teachers, and an environmental library open to all. TEREZA is also the coordinating organization for the GLOBE Program in the Czech Republic. 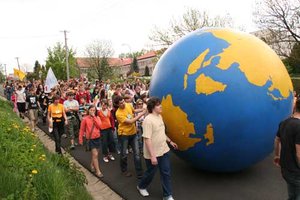 Every year for the past 11 years, TEREZA has hosted the GLOBE Games in the Czech Republic, bringing together environmentally concerned students, teachers, scientists and special guests from the Czech Republic and neighboring countries. The object of the GLOBE Games is to provide an opportunity for GLOBE students to learn about and share their experiences doing research on environmental topics, to initiate school-to-school collaborations, to take part in special environmental challenges involving many of the GLOBE protocols, and to encourage teambuilding as a vital part of the educational experience. 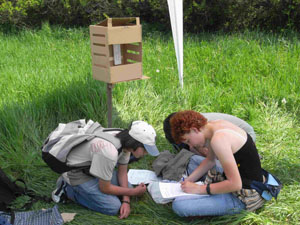 In 2008, GLOBE Games took place from 8-11 May in Bystrice nad Pernstejnem, in close cooperation with a very active GLOBE school Zakladni skola Nadrazni. Two hundred students and teachers from 36 GLOBE schools in the Czech Republic and 20 students and teachers from Hungary, Poland, and the Slovak Republic participated in the 2008 Czech Republic GLOBE Games. GLOBE Games in 2008 were presented in a new style and included three parts--a GLOBE Festival for the general public, a Student Conference, and Student Team Research in the surrounding area.

The festival was opened on the main square of the town by rolling out the big "Earth–ball," the symbol of the GLOBE Program in the Czech Republic. There were several booths in which students from ten GLOBE schools prepared special activities for children as well as for adults while explaining the significance of gathering measurements for GLOBE student research. The festival was accompanied by music, theater and dancing performed by local children's groups, lending a festive atmosphere to the Games. 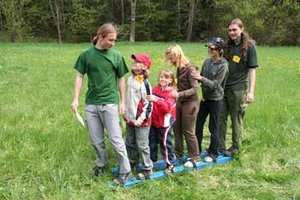 At the Student Conference, students presented their projects and events based on their GLOBE student research. They had received the criteria for evaluation well in advance which helped them to be well-prepared. Student teams also participated in research of surrounding natural areas. Each team consisted of 6 students from 3 different schools. They received a map of the surrounding area with marked study sites and a description of their tasks. During the day they visited 12 study sites covering many of the GLOBE protocol areas, such as measuring water quality, working with GPS, and identifying clouds. This was an enjoyable experience for all, and encouraged cooperation among the students involved.

Two workshops for teachers focused on soil and the carbon cycle. They were led by Mgr. Zuzana Lhotáková from Charles University in Prague and Prof. Luboš Borůvka from Czech Agriculture University.

To document this lively event, one group of students worked as reporters, preparing a special edition GLOBE Newsletter. They wrote articles, conducted interviews, created a lay-out of their Newsletter and prepared enough copies for distribution to participants at the closing ceremony. A second Newsletter was printed and distributed after the Games ended.

The cooperation among schools and the opportunity to come together year after year has had a unifying influence on students and teachers alike, and has greatly energized GLOBE Program implementation in the Czech Republic. The TEREZA Association wishes to thank the many companies and individuals who supported this special event: the Ministry of the Environment, Vysocina Region, the Mayor of Bystrice, Wera Werk, KPMG, and with the Czech GLOBE Alumni Association that helps every year with organizing the GLOBE Games. 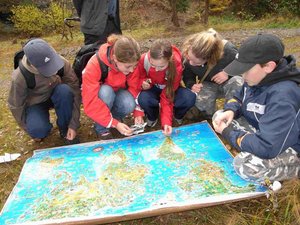 In May 2008, students from Gymnazium Kadan organized Mini GLOBE Games for 115 students from 13 schools in their region, preparing all facets of the event themselves: invitation letters, study sites, budget, and scheduling. Owing to the success of this event, students, together with director and GLOBE teacher Ms. Hana Koziskova, have started to think about making their Mini GLOBE Games an annual event.

In September 2008, GLOBE students from Gymnazium Aloise Jiraska in Litomysl organized Mini GLOBE Games for 95 students from 11 schools from their region. Their GLOBE teacher, Ms. Martina Kunderova, acted as their consultant, but the real work of organizing study-sites was done by students themselves. Despite the cold and rainy weather, all participants enjoyed this special event.

In October 2008, Mini GLOBE Games were held in Stribro for 95 students from 9 schools in the region. Mini GLOBE Games were prepared by students of Zakladni skola Manesova and DDM Stribro, who will be the co-organizers and hosts of the national GLOBE Games of the Czech Republic in 2009. GLOBE teacher Ms. Lenka Strankmullerova and director of DDM Mr. Miroslav Cvrk helped students prepare and organize this event. GLOBE students at the study sites explain to participants various activities, GLOBE measurements, and specific tasks. Despite very uncooperative weather again, with extreme cold and rain, the Mini Games were a huge success. It seems that weather cannot dampen the spirits of these enthusiastic GLOBE students!