The national coordinator of Program GLOBE for the Czech Republic is the TEREZA Association, a non-profit non-governmental organization that encourages and supports cooperation and active community participation in renewal and protection of a healthy environment, and thus contributes to the overall development of civic society. 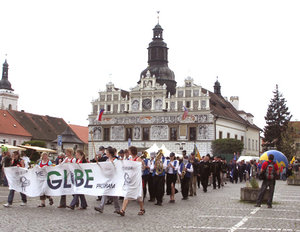 Every year for the past 12 years, TEREZA has hosted the GLOBE Games in the Czech Republic, bringing together environmentally concerned students, teachers, scientists and special guests from the Czech Republic and neighboring countries. The object of the GLOBE Games is to raise environmental awareness among GLOBE students through data collection and research, to initiate collaborations among schools throughout the region, to introduce participants to special environmental challenges involving many of the GLOBE protocols, and to encourage teambuilding as a vital part of the educational experience.

GLOBE Games have occurred annually since 1997, taking place each year in a different Czech city. This year, on 7th May 2009, students and teachers from many parts of the Czech Republic, Slovakia, Hungary, Poland and other European countries met to celebrate the 12th annual GLOBE Games in Střibro, Czech Republic. The GLOBE Games provide GLOBE students and teachers a special occasion in which to share their experiences and to introduce GLOBE to the general public in a festival-like setting. Through the GLOBE Games, students and community members alike gain new inspiration, initiate school-to-school collaborations and just have fun. In doing so, they are motivated to engage in further GLOBE projects in the future! 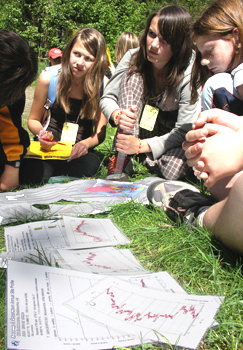 GLOBE Games are organized a little differently each year, as they are constantly in development. GLOBE Games 2009 were organised by TEREZA Association in close cooperation with the Basic School Mánesova in Stříbro. In total 141 students, 12 students-journalists, 9 students-guides and 44 teachers from 32 schools from all over the Czech Republic came to Stříbro on 7th May afternoon, along with students and teachers from Poland, Hungary, Germany and Slovakia. This year's GLOBE Games were modelled on a successful concept initiated last year. The 2009 GLOBE Games were composed of a Festival GLOBE for the general public, a Student Conference and a Nature Game for student teams to do scientific research in nature.

The town of Střibro boasts a long mining history. Most people who come there try to include a visit to the beautiful Mining Museum with St. Prokop´s drift. (A drift is a long corridor, deep below the surface of the Earth, derived from mining). On Friday 8th, the GLOBE Games participants assembled in the Open-air Mining Museum to begin the Nature Game. The principal of local mining association promised that everyone who would successfully complete the race could eventually meet Duchmaus, a local mine ghost. The teams explored activities in eight learning areas: Phenology, Pedology, Meteorology, Data, double Hydrology, Land Cover and Adrenalin. After teams had successfully completed all tasks, they were challenged to solve the local legend of Duchmaus. By successfully answering three questions, they were allowed to enter the drift and meet Duchmaus in his underground empire. Friday morning offered special activities for teachers as well. These activities included, how to incorporate GLOBE into the school educational system, and a special workshop about the Carbon Cycle. 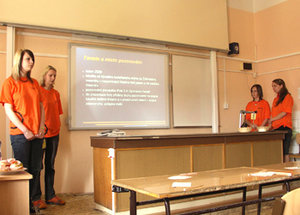 Saturday, May 9th, was a high-energy day. At the Student Conference in five classrooms, students presented their GLOBE projects and measurements. The topics focused on phenology as current annual topic, hydrology, and GLOBE discovery. Students had received the criteria for evaluation in advance, which helped them to be well-prepared. All presentations were observed by three members of the review commission, who provided helpful feedback.

On Saturday afternoon, Festival GLOBE took place on the main square in Stříbro. The Festival was opened by rolling a very large plastic balloon, the "Earth–ball," the symbol of the GLOBE Program in the Czech Republic. In the square was a huge podium and eight stalls with GLOBE activities for the public put together by GLOBE students. An official closing ceremony was also part of the Festival. 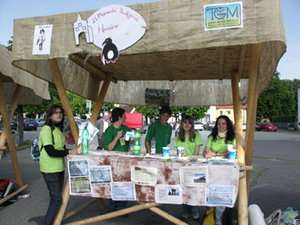 During the entire event, students were working, engaged as journalists to report on the news and producing an on-the-spot GLOBE Games newspaper. Another group of students took care of foreign participants, showing hospitality as guides.

The cooperation among schools and the opportunity to come together year after year has had a unifying influence on students and teachers alike, and has greatly energized GLOBE Program implementation in the Czech Republic. The TEREZA Association wishes to thank to many companies and individuals who supported this special event: the Ministry of the Environment, the Plzeň Region, the Mayor of Stříbro, KPMG and others, and the Czech GLOBE Alumni Association that helps every year with organizing the GLOBE Games.

Some of the Czech schools organized Mini GLOBE Games of their own for themselves and for other schools in the region. In 2008, Mini GLOBE Games had been held in Kadaň, Litomyšl, and Stříbro and in 2009 took place in Kadaň again and in Prague as well. Schools used previous models of GLOBE Games, organizing nature investigations on a few study sites. An important part of these activities is the teambuilding activities and quizzes. 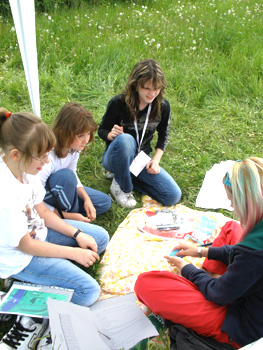 Gymnázium in Kadaň has been utilizing the GLOBE Program for many years. This school is one of the most active schools in the Czech Republic. Last year's success with the Mini Games caused them to repeat their efforts this year. On 14th May, at least 60 students from 11 basic schools from the region came to Kadaň.

Prague was unique in another way. Two primary schools organised Mini GLOBE Games together. About 150 students from both of these schools spent a day in nature by observing natural conditions in a park in Prague. Teachers prepared 10 study sites, with activities led by older students who are familiar with GLOBE measurements. These older student introduced the activities to pupils from the lower levels of primary school who were new to GLOBE. Their aim was to engage interest about GLOBE and to enlist participation of these younger students for the GLOBE Program in the future.