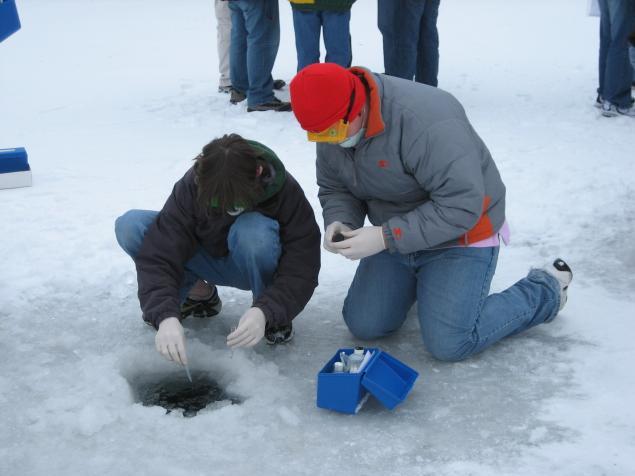 United States GLOBE Teacher Bruce Huckins' 7th grade class, at West Central Middle School in Maynard, Iowa, is conducting the second year of the Volga River Project. In 2008, Huckins' class created the project by measuring the Transparency, Nitrate, pH, Dissolved Oxygen, and Water Temperature of the Volga River four times throughout the year, beginning in November. Huckins' current class decided to continue the project and repeat the same tests every month starting in November 2009. Since the Volga River runs through the town of Maynard, the locality of the project peaks the students' interest in assuring the water is safe for recreational activities such as swimming and fishing. In addition to testing the water each month, students research the importance of turbidity, nitrates, pH, dissolved oxygen and temperature to water quality. The students learned, for example, that dissolved oxygen levels under 5 mg/L put stress on aquatic life and higher temperatures increase the demand for oxygen. By following GLOBE protocols and using data to generate and answer questions, the class observes how all components of the Volga River are connected.

Mr. Huckins and his 7th-grade students presented their project at the University of Northern Iowa "Spotlight on Technology" day, 26 February 2010. The students presented a PowerPoint.pdf to other K-12 science and mathematics students, University students majoring in Education, faculty, and guests. The Volga River Project serves as an example to students around the world that a well-planned research project engages an entire community in locally relevant issues about their environment. The authentic use of technology and mathematics to organize and communicate data also increases enthusiasm for future STEM courses and careers. According to Huckins' students, "Experiencing science in the field was fun, motivating, and is something we will always remember."

West Central Middle School joined GLOBE in 2009 when Mr. Huckins was formally trained by Marcy Seavey, GLOBE U.S. Partner from the Iowa Academy of Science, at the Impacting Achievement with Collaborations and Technology (IMPACT) workshop, which integrated GLOBE protocols with weather forecasting, technology, and science. IMPACT is a year-long professional development experience which begins with a two-week institute and is followed up with a series of video conferences, Internet chats, and school visits. GLOBE and STORM, A University of Northern Iowa based meteorology program, are used as inquiry-based scientific content, and technology is integrated to assist in organizing and communicating data. Seavey commends Huckins' many accomplishments, expressing "Visiting Mr. Huckins' class was one of the highlights of that year's IMPACT program for me. He has a genuine rapport with his students and an infectious enthusiasm for science and education. I am so happy for his continued success in GLOBE!"

According to Huckins, "The Volga River Project was one of the best learning experiences for my students and for myself! It brought real science investigation to them. They were highly motivated to complete the study and to communicate their findings to the community. This study was also very good for me as a teacher. This project has given me the confidence and encouragement to do more real-life investigations. I would like to thank the GLOBE and the IMPACT program for this honor, and encourage others to do real life and meaningful science in their classrooms."

Congratulations to the students at West Central Middle School for their hard work and enthusiasm as they continue to engage the GLOBE community in their research activities!