The 6th annual GLOBE Green Walk was held on 30 December 2010 at Al Areen Wildlife Reserve and Park in the Kingdom of Bahrain. Al Areen was established in 1975 and is home to over 100,000 plants and trees, and more than 500 animals including the Arabian oryx, which is virtually extinct in the wild. Wild bird species are also attracted to the park. This wildlife park is divided into two parts; one is open to the public while the reserve area is off-limits to the public without special permission. This year's event examined the natural biodiversity found in Bahrain. Two hundred fifty students from 42 schools observed, classified, and categorized the large number of species found within this protected area including insects, arthropods, desert plants, animals, and both land and seabirds.

Prior to the event, a GLOBE team consisting of alumni, scientists, and students made several trips to the park in order to organize and prepare the stations. Each station was named after an animal native to the area in order to highlight various organisms and teach students about biodiversity as they made mental comparisons between stations. Students would then observe living organisms throughout the park, observing those differences firsthand. 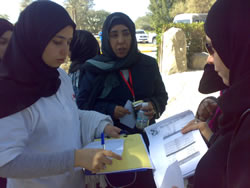 The program opened with a welcome speech by Mrs. Wafa Bin Dayna, Bahrain Country Coordinator from the Ministry of Education, followed by remarks from Ministry of Education Program Coordinators to outline the day's activities. In addition, a panel of experts from the Nature Reserves Department of Al Areen Wildlife Park volunteered their assistance with the event. T-shirts, hats and refreshments were distributed to GLOBE Students before beginning their GLOBE Green Walk. Students were divided into 13 groups in order to control movement between the stations. Within each group, two smaller groups were formed: one to photograph and sketch drawings of organisms, and one to observe and categorize the various life forms found in the reserve.

Mrs. Wafa Bin Dayna stated that "throughout the event, the students promoted a spirit of cooperation and friendly competition among one another."

The GLOBE Bahrain team set a number of goals to be observed in this annual event with the primary focus of identifying the biological diversity of the Kingdom found in the Al Areen Wildlife Park. From 8:00 am to 4:30 pm, participants spent the day identifying the properties and characteristics of organisms, as well as noting their importance in the biological equilibrium. They employed this knowledge by filling out charts given to each team with the information they discovered. Participants also used GLOBE Phenology Protocols to identify some of the natural plants at the reserve and the benefits of the plants living in the park. 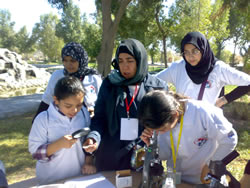 The 6th Annual GLOBE Green Walk was a success in allowing GLOBE students to promote environmental awareness in an unconventional way by supporting new methods of learning while engaging in the process of educational collaboration and transfer of knowledge between students and scientists through discovery. The event was sponsored by Assistant Secretary for General and Technical Education, Mr. Nasser Al Shaikh, and organized by the GLOBE Program in Bahrain. Thank you to all sponsors and participants for maintaining the GLOBE Green Walk tradition, which allows students to understand the fundamental relationships of Earth's organisms.

Read about past GLOBE Green Walks in Bahrain: