The Climate and Land Cover (CLC) Project, a joint effort between The GLOBE Program and The National Oceanic and Atmospheric Administration (NOAA) to validate land cover classification and related climate models, is one of the Intensive Observing Periods (IOPs) within the GLOBE Student Climate Research Campaign. GLOBE IOPs provide students from around the world with opportunities to take themed measurements over short periods of time and analyze their data. NOAA Scientists involved in the Climate and Land Cover Project are also analyzing the photographs submitted online by GLOBE Students to test the accuracy of land cover types against satellite images of Earth's surface.

During the pilot CLC that occurred from April – May 2011, scientists observed that according to satellite images, GLOBE Partner Universidad Nacional Agraria La Molina (UNALM) in Lima, Peru, is located in an area that has a heterogeneous landscape (various types of land cover). Members of the CLC Team contacted the school and requested that they take photographs at a given latitude/longitude to help the scientists validate the proposed landscape.

The area is dominated by urban surfaces; however, there is a section of land that is cropland. As a result, UNALM students were asked to collect photos of the cropland data as well as at an additional latitude/longitude specified location. 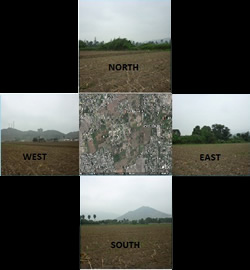 The additional cropland photographed is .8 kilometers wide, as identified in the land cover data. The two sets of pictures display representative regions of the local environment: cropland and urban city. In addition, there are also mountains to the south in the second set of photos which could not be seen in the first photographs. The second set provides a better view of the environment around the area. With the assistance of these photographs, scientists are able to gain a perspective from the ground and validate the true types of land cover in the area. 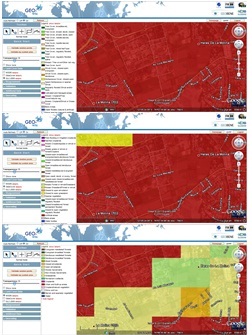 NOAA scientists greatly appreciate the students at Universidad Nacional Agraria La Molina for assisting in this unique and important research by providing the data necessary for validation of land cover in this area of Peru. NOAA and the GLOBE Program Office would like to encourage all GLOBE schools to participate in the upcoming Climate and Land Cover IOP.

Find out how to participate in the next Climate and Land Cover intensive observing period 1 - 31 October 2011.

Students at Universidad Nacional Agraria La Molina previously collaborated with scientists to study connections between water resources, land use, and climate in the Andean Amazon region. Read more in the 2002 Newsletter.