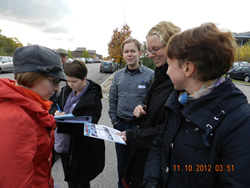 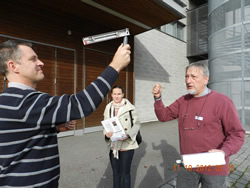 The workshop explored topics such as how to best teach students about climate, the measurements involved, and what constitutes a good research question. Teachers learned how GLOBE data can be used to benefit students, scientists and educators all over the world, and how to best convey the importance of this data to their students. They also learned the proper use of various scientific instruments including a basic thermometer, infrared thermometer, soil thermometer, sling psychrometer, and rain gauge. Read a description of these instruments and others on the GLOBE Toolkit page.

According to Ms. Virta, "The number of participants in this training event reflected a very positive response toward GLOBE in Finland. The furthest participant came from the north side of the Arctic Circle, 1000 km away from the capital city. We had a full variety of teachers of all grades represented." This training was the beginning of the first cooperation between GLOBE teachers, meteorologists at the University of Helsinki, and the Finnish Meteorological Institute. The GLOBE Finland community is delighted to have such high level experts as partners. 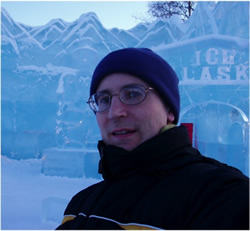 The GLOBE atmosphere workshop was funded by the U.S. Embassy in Helsinki and was led by GLOBE U.S. Partner and Master Trainer Dr. Kevin Czajkowski. Dr. Czajkowski has been lead of the University of Toledo GLOBE partnership since 2001. He developed the GLOBE surface temperature protocol so that students can investigate how land use where they live affects the energy budget. Each year he organizes the Surface Temperature Field Campaign.

GLOBE Finland and the GLOBE Program Office would like to extend our thanks to all the participants for a very motivated and inspiring workshop! According to Ms. Virta, "This event truly demonstrated that when there is a common interest and people are working together it is possible to make things happen. We hope that this event was a launch for new era in GLOBE Finland!" 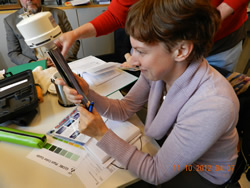