Seventy-nine GLOBE Students from 13 Mexico City technical secondary schools gathered on 15 November 2012 to present research papers they wrote using GLOBE student data collected from 2009 to 2012.  The event was held as part of the Third Meeting of Young GLOBE and took place at the Center for Technology Innovation in Education (CITE) of Mexico City.  Nineteen teachers, seven parents and five GLOBE schools principals also took part.  Students gave 15-minute oral presentations, supported by technological resources including computers, cameras, photos, videos and graphics.  They demonstrated the results of their analysis of data on rainfall peaks by year, highlighting the differences in temperatures in one area during the same period over the years and linking these results with local environmental problems.  Students were able to show their peers and the academics and other officials present the results of their GLOBE investigations.

They also used photographs, videos, and satellite Internet applications such as Google maps to show how they located their study area and to describe the importance of their research to concerns about natural resources. They also used these tools to demonstrate the social effects of climate change and pollution and potential mitigation measures to alleviate environmental problems in their communities.

Also participating in the event were: 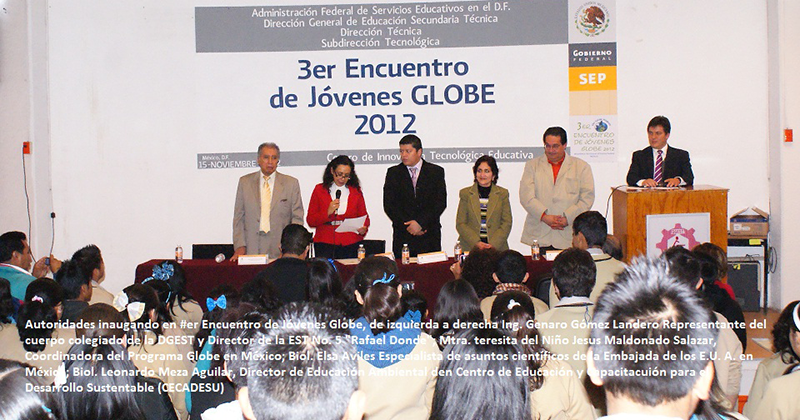 The event was intended to strengthen scientific training of students through their direct and active involvement in a scientific program of international education to promote science learning through experimentation. A second aim was to strengthen environmental education of students applying the results of the GLOBE program on mitigation of, and adaptation to, climate change.

Looking to the future, there are plans to strengthen the link between the GLOBE Program and other national programs, such as Mexico Quetzalatl Brigades and School Gardens, to strengthen scientific training of students in order to help students understand some of the impacts of local climate variability on Mexico's communities and to promote a culture of prevention.

The GLOBE Program in Mexico has been one of the most successful in the Latin America and the Caribbean for more than 10 years, thanks in large part to the enthusiasm and hard work of its GLOBE Coordination.  Since 2010, Magister Teresita del Niño Jesus Maldonado of the Secretariat of Environment and Natural Resources of Mexico (SEMARNAT) and her team, including Rebecca Contreras Ortega and Martha Ruth Chavez have done a remarkable job in coordinating the GLOBE Program in Mexico.