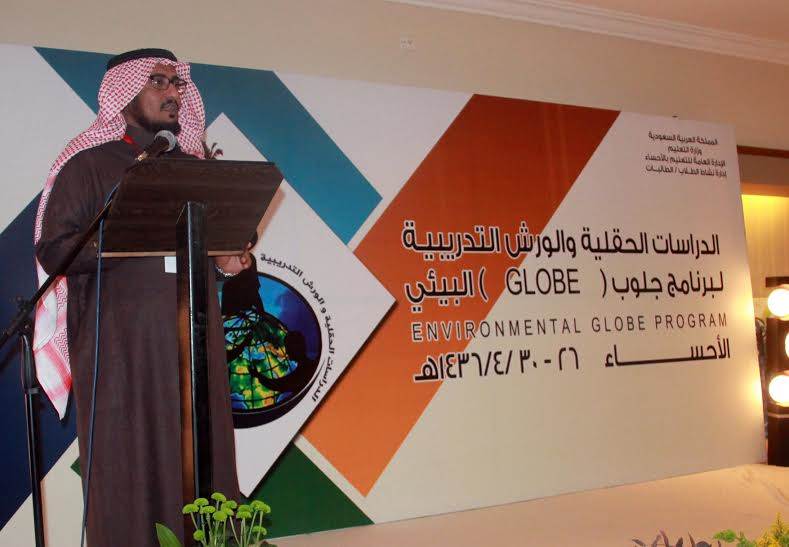 On Day 1, following the opening ceremony, teachers and local coordinators joined the Atmosphere session for an introduction to, and practical training in, the basic Atmosphere protocols.  GLOBE students joined sessions that provided a basic introduation to Al-Ahsa, a traditional oasis in Eastern Saudi Arabia located about 60 km inland from the Arabian Gulf, which makes up much of Saudi Arabia's Easter Province. They also learned about climate and water and soil characteristics, and their impact on agriculture.

Day 2 began with a basic introduction to Hydrology and Soils, followed by practical training of Hydrology and Soil protocols.  Two female and two male students from each Educational Directorate, had been selected to join the field studies, and traveled to Al-Maha Farm to join the practical application of the protocols to gather data about the water and soil characteristics. Based on data collected, they wrote recommendations regarding the best use of the well-water used to irrigate the agricultural fields of the farm

On Day 3, all teachers, students and local coordinators joined in the training about the GLOBE website and data entry.

Mrs. Norah Al Nasser writes "I am very satisfied about the event; the teachers were very active during training and showed enthusiasm to implement GLOBE in their schools.Students were impressive in the implementation of GLOBE protocols for collecting data. We will keep going in our GLOBE plan to support teachers and students and providemore interesting and beneficial events for them."