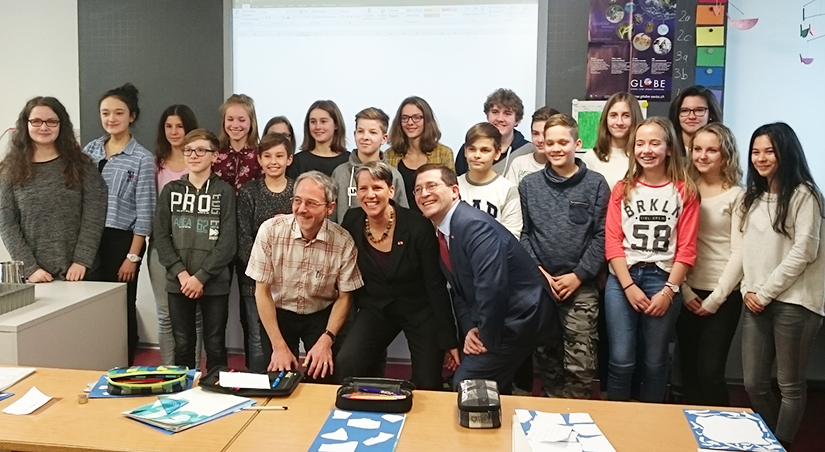 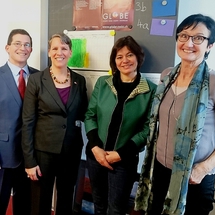 Uzwil/St.Gallen (Switzerland): On 5 December 2016 the U.S. Ambassador to Switzerland, Mrs. Suzan LeVine, along with Mr. Eric LeVine, paid a visit to a GLOBE school in Uzwil. After the welcome speech by the president of the municipality, the two guests were invited to the classroom of teacher Markus Eugster, who has received national acclaim for his participation in the GLOBE Program. There they received an overview of the Program by Juliette Vogel (Country Coordinator of GLOBE in Switzerland) and Ursula Frischknecht (Co-President, Association GLOBE Switzerland). The presentation focused on the links between GLOBE, STEM and curricula.

After the introductory session several students presented professionally the phenology research project that they had been working on during the last growing season. Following this, Mr. Eugster took everyone through a short introduction lesson on GLOBE weather and atmosphere. Subsequently, everyone was invited to participate in a highly animated learning activity focused on cloud cover estimation. Overall, Ambassador LeVine was very impressed by all the GLOBE activities along with the student participation, especially in activities that concerned environmental studies linked to STEM. In this context, the GLOBE coordinator of Switzerland, Juliette Vogel, remarked: “We could perfectly show how GLOBE mission is adapted to this need.” 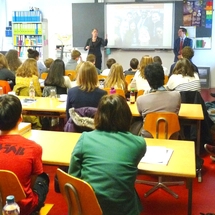 Towards the end, Ambassador LeVine gave a very interesting and dynamic speech on her career, her professional development and her responsibilities and activities as U.S. Ambassador to Switzerland. Everyone present listened to her spellbound and a large number of students were very inquisitive and posed questions to her. Ambassador LeVine was equally delighted and patient in answering them all.

"Ambassador LeVine and her family will be leaving Switzerland in January 2017, as her term comes to an end. We convey her our best wishes towards her professional and personal life. However, we shall continue collaborating with the U.S. Embassy towards the future events of the GLOBE Program in Switzerland,” concluded Juliette Vogel.

Click here to read about the media coverage of the event.