GLOBE at NSTA 2008 in Boston, Massachusetts

The National Science Teacher's Association (NSTA) has been hosting Conferences on Science Education since 1952 with an overarching goal to provide educators with the latest in science content, teaching strategies, and research to enhance and expand their professional growth. 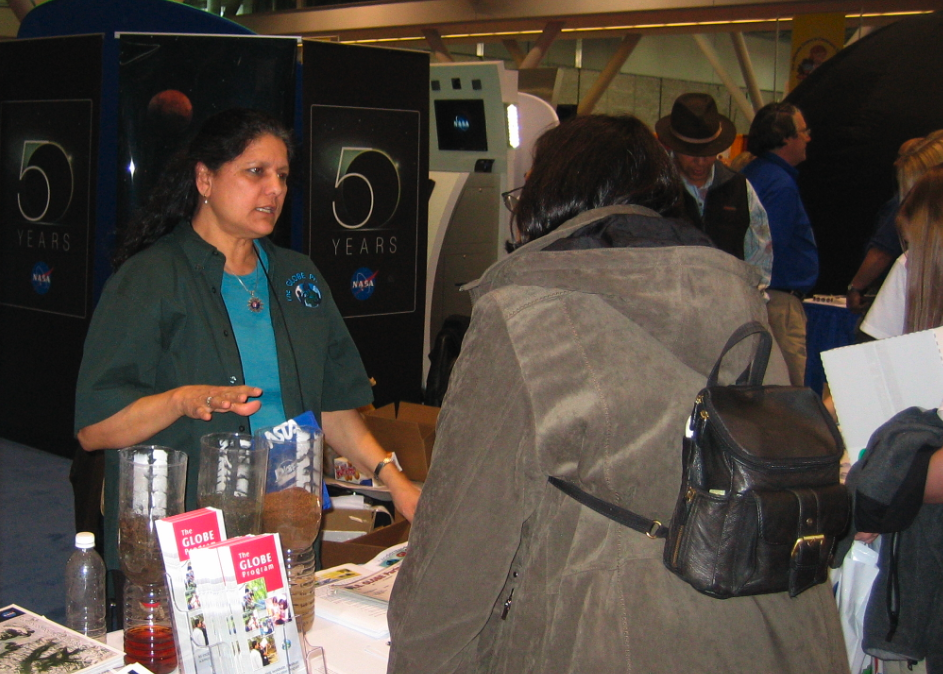 GLOBE once again had a strong presence at the annual NSTA Conference on Science Education on 27 – 30 March 2008 in Boston, Massachusetts. Major activities included the fourth annual GLOBE North America Regional meeting, the annual GLOBE Community reception, GLOBE representation in both the NASA and UCAR exhibit hall booths, participation in two National Earth Science Teachers Association (NESTA) Share-a-thons, as well as several presentations made throughout the conference by GLOBE's ESSP teams. GLOBE FLEXE and Carbon Cycle made presentations about their projects while GLOBE at Night participated in the Informal Science Day session. In addition, GLOBE once again was involved in the planning of NSTA's International Science Education Day and presented with many of our Partners during the event. 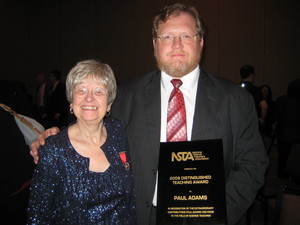 GLOBE Partner Dr. Paul Adams was awarded the NSTA Distinguished Teaching Award which recognizes extraordinary contributions made to the field of science teaching. Dr. Adams is an Anschutz Professor of Education at Fort Hays State University in Hays, Kansas. He was nominated by retired GLOBE Partner and previous NSTA President Dr. Emma Walton. Dr. Adams and his GLOBE Partnership at Fort Hays also collaborates with the GLOBE Partnership at Hampton University in Hampton, VA where he serves as a lead instructor forAIM Education Outreach Program.

GLOBE Partner Dr. Patricia Shane who is the Associate Director of the Center for Mathematics and Science Education, University of North Carolina at Chapel Hill was elected the 2009-2010 President of NSTA. Dr. Shane will serve a 3-year term starting with president-elect in 2008-2009, president in 2009-2010 and finally past-president for the term 2010-2011.

The GPO sends our hearty congratulations to both Drs. Adams and Shane for their outstanding recognition at NSTA.

NSTA International Science Education Day
GLOBE played a significant role in NSTA International Science Education Day activities. This year's conference theme, "The Many Faces of Scientific Inquiry: A Global Perspective on Classroom Applications (K-16)" brought educators from over 20 countries together to network with science educators from various cultures, including those from North America. The ultimate goal of all NSTA international activities is to engage more American teachers of science in international opportunities with the intent that they will become better teachers in their own classrooms and better impart the global dimensions of science to their students. In addition to a Poster presentation providing detailed information about GLOBE, a presentation entitled "The GLOBE Program and Inquiry Applications Around the World" provided participants with a glimpse into the student research activities occurring in GLOBE's regions around the world. Presenters included Bill Batycky (GLOBE Canada, Calgary, Alberta); Dr. Michael Odell (University of Texas at Tyler, Texas); Margaret Besong (GLOBE Cameroon); Birgit Rademacher (Institut fuer die Paedagogik der Naturwissenschaften (IPN), The Leibniz Institute for Science Education, The University of Kiel, Germany); and Drs. Teresa Kennedy and Emmett Wright, Deputy Directors from the GLOBE Program Office. International Science Education Day provided a great deal of information about scientific inquiry and its implementation in primary and secondary classrooms, as well as in higher education, on a global scale.

Booths
GLOBE Program Office staff visited with over 900 teachers and educators, distributing program materials and providing partner contact information at the UCAR Office of Education and Outreach booth as well as at the NASA booth. This year, many conference attendees reported either attending GLOBE training in the past or had heard about the GLOBE program and came to the booths looking for more information. Some teachers stopped by to share their recent training and implementation experience and others were interested in learning about how GLOBE actvities would fit in their state science standards.

GLOBE Reception
The annual NSTA GLOBE reception to honor GLOBE teachers, Partners, Trainers, PI's and other community members involved in GLOBE was well attended. Many attendees participated in a GLOBE community survey regarding interest in participation in a future GLOBE world-wide climate change study resulting in a variety of interesting themes as suggested topics of study. Thank you to all who provided ideas! As in the past, the reception served as a fabulous networking session providing everyone opportunities to share their accomplishments with or gain insight from other members of the GLOBE community. In addition, participants enjoyed GLOBE giveaways as door prizes, including GLOBE vests and polo shirts, GLOBE water bottles and teaching materials such as Elementary GLOBE books and cloud charts. We hope to see you all at the GLOBE NSTA Community Reception next year in New Orleans! 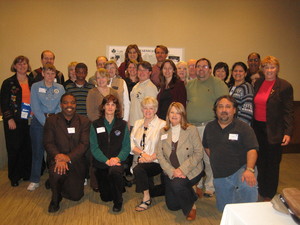 GLOBE U.S. Partners began meeting during NSTA in 2006, when the first official partner meeting took place during the National Science Teacher's Association annual conference in Anaheim, California. Last year in St. Louis, Missouri, the meeting was expanded to include Canada, and officially created the North America GLOBE Regional Consortium. The tradition continued this year as U.S. Partner and GLOBE Country Coordinators from Canada met on Wednesday, the day before NSTA began, to share their experiences on implementation of GLOBE activities in their target areas, and to discuss ideas about strengthening GLOBE in the region. This year's presenters included GPO staff, GLOBE Partners, Trainers, Teachers, and also a GLOBE Parent who is the founder of the GLOBE Parent Council. Representation from UCAR / National Science Digital Library (NSDL) and a Skype Video conference with the U.S. GLOBE Alumni Representative. All Partner PowerPoint Presentations are currently available for download.

Dr. Teresa Kennedy, Deputy Director of International Programs and Partnerships, and Ms. Nandini McClurg, North America Regional Desk Officer, provided an update on initiatives underway at the GPO, including information on the 2008 GLE and Annual Conference that will take place in Cape Town, South Africa on 22-27 June 2008; the upcoming ESSP Training Workshop that will take place in Boulder, Colorado on 3-8 August 2008; new information contained within the Guidelines for GLOBE Program Implementation by U.S. Partners document; as well as the vision and goals for creating a GLOBE Student Research Campaign on Climate Change in 2010-2012.

Many new GLOBE posters have been created for use in classrooms. They can be found underMedia Materials on the Partner Resources page of the GLOBE Web site and can be downloaded for display purposes. All Partner presentations during the day-long event focused on strengthening implementation in support of student research. Training of teachers and the importance of creating kits for training purposes was discussed and all GLOBE's vendors were mentioned. A CD containing training agendas that have been provided to the GPO was distributed to all attendees. In addition, new materials that have been developed to facilitate training and media coverage were shown.

To view the Web page displayed during the event from the Scientists page of the GLOBE Web site see: Instrument and Equipment Suppliers.

In addition, several resources on the GLOBE Web site were highlighted during the day:

Mark your calendar for next year's NSTA GLOBE North American Regional Meeting in New Orleans. Begin planning to attend NSTA 2009 now. We hope to see you next year!