Green Down of a Tree in Iowa

At the MFL Mar-Mac Elementary School in Monona, Iowa, USA, Crystal Thurn's 3rd grade class spent three months last year studying seasonal change by doing a research project that took them outside their classroom on beautiful crisp days last Autumn. The project required that the students closely observe one maple tree in the schoolyard to see what factors might affect the tree as it changed color and dropped its leaves. At the beginning of the project, Ms. Thurn asked students when they thought the leaves would change color and drop their leaves. The general consensus was this: when Fall comes, the leaves will all change color and fall at random from the tree. 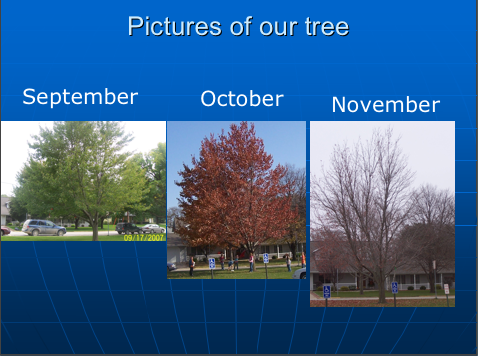 The class was divided into four groups. Each group approached the tree from a different side --North, South, East and West, and tagged a particular branch that they would observe over time. The students asked the questions: Does the direction our branches face effect the color change in our leaves and the time when they fall off the tree? Which leaves will drop first? What factors affect the amount and rate of color change? Each group began to develop their own hypotheses and predictions about what might happen. The students made posters detailing their research, compiled written descriptions of their observations and collected color drawings eventually compiled for a powerpoint presentation.

As data were being collected about the rate of color change, the South Group predicted, correctly, that the West-facing branches would be the first to change color and fall, the leaves on the South-facing braches would be next, followed by the leaves on the North-facing and finally the East- facing branches. The students' powers of observation were heightened as they were required to become keen observers of both subtle and dramatic changes. They observed some unusual and unexpected results such as the fact that the leaves facing East, West and South turned red before dropping, but the leaves facing North changed to yellow/orange instead. They did not expect this result. Comments from the students include: "We liked going outside to see if the leaves changed." and "We like learning about the different leaves and their colors." One student, Whitney, observed, "Some leaves change fast and other leaves change color over time. " 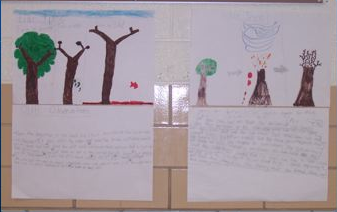 At the conclusion of the research project, Ms. Thurn asked her third graders if they thought that next year's class would find leaves changing color and dropping on the same dates as this year. "Oh no!" was their quick reply. So then she asked, "What might make the leaves change colors or fall off the branches on different dates." After thinking about this a moment, one student said he believed that the strong winds that blew during the course of the experiment affected the time of leaf fall. Therefore, if it is less windy then the leaves will not fall as rapidly. Everyone agreed. Ms. Thurn rephrased the question by asking, "So, maybe many cloudy days would make the leaves change color faster?" The students all agreed that this might be the case and also decided that other factors, such as rainfall, could play a roll in when the leaves change color and when they fall. Ms. Thurn is already thinking about next year, when students might include observations of more than just one tree.

Marcy Seavey, of the Iowa Environmental Education Council, visited Crystal Thurn's class during this question and answer period, and was delighted with the level of excitement these students displayed when talking about what they learned. Next year, their project could possibly include observations of more than just one tree. " I don't think they like the idea of next year's third graders doing "their" experiment next year. I think they want to do it themselves in the 4th grade too!"

For more information, see the Powerpoint presentation of this activity.