Students in Punjab, India, Look to the Clouds with CloudSat

CloudSat, a NASA Earth observation satellite launched on 28 April 2006, is designed to study clouds and the role clouds and aerosols play in regulating Earth's weather, climate and air quality. CloudSat collects information about the vertical structure of clouds unavailable from other Earth observing satellites. Its data are improving our cloud models and providing a better understanding of human impact on the atmosphere. CloudSat is flying the first satellite-based millimeter-wavelength cloud radar that is over 1,000 times more sensitive than existing weather radars that allow us to study clouds from space.

Students from 11 countries (Canada, Thailand, India, New Zealand, Germany Australia, Estonia, Croatia, United States, Cameroon, and Dominican Republic) have been participating in the CloudSat Education Network (CEN) by "ground truthing" the measurements taken by the CloudSat satellite. Ground truth is a term used in cartography, meteorology, satellite imagery and a range of other remote sensing techniques for data collection on the ground in order to compare image data to real features and materials on the ground. The collection of GLOBE CEN data from weather stations on the ground enables calibration of remote-sensing data and aids in the interpretation and analysis of what is being observed from space. Using their dedicated login to access the satellite tracking program, GLOBE CEN students determine the exact date and time when CloudSat will be flying overhead. The orbiting satellite takes passes over every part of the globe on sixteen day cycles so students must plan to be available on these pre-determined dates and times to take measurements to coincide exactly with the satellite fly-over. By participating in the CloudSat Education Network, GLOBE students are helping to contribute to new findings from NASA's CloudSat, as well as from other spacecraft in NASA's "A-Train" constellation of five Earth Observing Satellites. These GLOBE students, working alongside NASA scientists, are helping to uncover important insights into this year's record reduction of Arctic sea ice, global rainfall patterns and the effects of pollution on clouds in order to resolve questions about climate change. 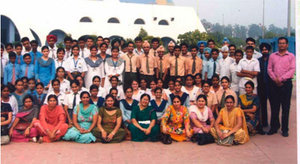 GLOBE students in India have been involved in the CloudSat Education Network (CEN) since 2005, when Dr. Neelima Jerath, the Assistant Director of Punjab State Council for Science and Technology (PSCST) in charge of Environmental Education Professional Development for science teachers in Punjab, met CloudSat scientist at a conference in Germany. What began as a simple conversation has blossomed into a fruitful collaboration between the NASA CloudSat Education Network and eight schools in the Punjab, India.

In order to participate in CEN, schools are required to have at least one teacher who is trained in the GLOBE Atmosphere Protocols. In order to ensure that Punjabi schools could participate in the program, Mr. Raj Mehta, India Country Coordinator from the Government of India Ministry of Environment and Forests, provided GLOBE training to Dr. Anand Gupta, Lecturer at the Punjab State Institute of Science Education, who --in turn-- passed on what he learned to Ms. Ravleen Singh, Punjab Science Teacher Trainer, and to all the teachers now collaborating together from the eight GLOBE CloudSat Schools in the Punjab region. 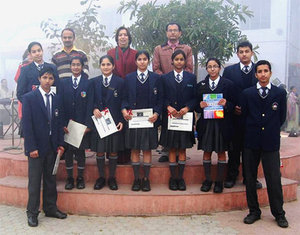 In January 2007, Nandini McClurg, North American Regional Desk Officer, was traveling in India, her home country, and volunteered -with the help of Dr. Jerath, Dr. Gupta and Ms. Singh - to visit the schools and explain the GLOBE protocols and hands-on activities to the teachers and students in Hindi. This opportunity allowed the students to learn from a native language speaker and sparked a greater understanding of GLOBE's protocols and learning activities. Subsequently, the students started to take leadership roles and form GLOBE/CloudSat Clubs, designing their own inquiries about what they wanted to learn from the ongoing data reporting activities that they were engaged in. Teachers began incorporating the activities in their science curriculum and schools that had access to Internet started to report data, explore the GLOBE Web site, CloudSat and other NASA sites, and communicate with CloudSat scientists at Colorado State University in Fort Collins, Colorado, and NASA Jet Propulsion Laboratory (JPL) located near Los Angeles, California. Schools that did not have access to the Internet sought help from PSCST to obtain government grants to equip their schools with computers. Teachers and students started to take interest in learning about the technology and about developing English skills in order to read and understand the information on the NASA Web sites. Teachers who had never used email before were now setting up email accounts so that they could share their data. 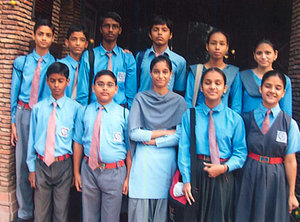 In the following 8 to 10 months, ground observation data-reporting from 4 of the 8 schools increased considerably and students from grades 9 through 12 started to develop a sense of responsibility about the project, assigning themselves tasks in the hands-on activities. They received certificates of involvement from CloudSat that had a very tangible value, especially to those who were graduating from High School.

By July 2008, 7 out of 8 schools were reporting data, making India's schools some of the top performing among the network's approximately 100 CEN schools. One remarkable and noticeable impact of involvement in GLOBE and CloudSat activities has been the developing confidence among teachers about their ability to become involved in project-based science. Hands-on and inquiry-based science education has become a viable pedagogical approach.

The schools recognized the achievements of their teachers and have awarded them certificates of involvement. Another measurable indication of the success of student CEN participation was that a significant number of students have opted to become involved in the GLOBE/CloudSat activities as extra curricular activities. Many presented their work as local science fair projects and their advances in public-speaking on the subject of the atmospheric sciences has been a considerable accomplishment. 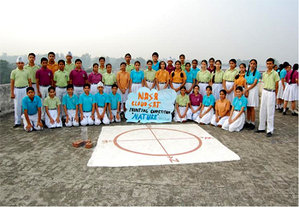 At three government schools participating in GLOBE and CloudSat activities, scarcity of resources and funds to purchase textbooks has been a struggle. Lack of a reliable power source and lack of technology training have made it extremely difficult for the students to report data. And yet the students have achieved tremendous appreciation for what could be done through technology, and have made significant gains in their English skills. They have taken a deeper interest in science and technology and even won an opportunity to go on a field trip to ‘Science City,' a hands-on science museum.

Located in a low socioeconomic neighborhood, one of the all-girls government schools resides in a cluster of buildings that were once a women's jail and housed women freedom fighters during India's struggle for independence. The teachers at this school had expressed difficulty in retaining girls in their school because parents cannot afford books, uniforms and supplies and, more fundamentally, do not see the value in educating their daughters beyond the 10th grade. Remarkably, 18 months after their initial introduction to GLOBE and CloudSat activities, many girls are continuing in school beyond the 10th grade and parents are expressing interest in their daughters becoming teachers. Two of the participating students from this all-girls school entered and won an essay contest sponsored by the ‘Science City'(sample essays one, two, three). The teachers are rightfully proud of these accomplishments. The local paper featured the schools involved in NASA's GLOBE and CloudSat activities. 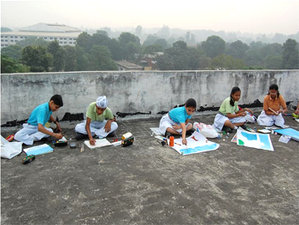 The students learned about the work of CloudSat Principal Investigator Dr. Graeme Stephens, whose fascination with clouds inspired him not only to study clouds but to paint them, In November 2008, the students of Police D.A.V. Public School conducted a cloud painting day. Clouds present a challenging subject for any artist, especially given that they never sit still for a portrait! But the multi-faceted work of GLOBE students in Punjab shows how much there is to be learned, across the curriculum, by focusing on clouds.

Congratulations to the GLOBE students of Punjab for their dedicated efforts to learn more about Earth system science by looking to the skies, a natural laboratory whose experiments have been running since the beginning of time!