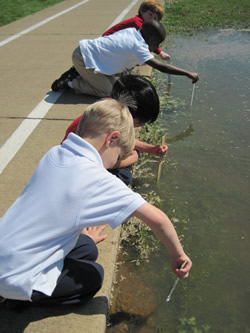 Ms. Norma Stigall, GLOBE Teacher at Phoenix Magnet Elementary School in Alexandria, Louisiana, led her Pre-K class on a scientific expedition to study the scientific elements of the world they live in. Ms. Stigall introduced these young students to the hands-on approach of GLOBE by guiding them through the steps of observing and measuring the ever-changing aspects of their environment. With rulers in hand, a group of four-year-old students set out to observe and study Atmosphere and Phenology factors within selected areas. Learning the concept of using different measurement tools such as a rain gauge to measure rainfall, or a ruler to measure shallow water depth, these young scientists began to learn the meaning of terms such as length, width, height, and depth in relation to GLOBE data measurements.

The students observed that it had stormed the night before. "It was so rainy there was a bunch of water on the ground," one student noted. Ms. Stigall instructed the students to find the deepest mud puddles and measure them with the rulers they each carried. The students had fun measuring small puddles that ranged from four to 10 inches deep. One student made a practical connection when he stated, "My mud puddle was four inches deep, and I am four [years old]!" In addition to studying mud puddle depths, the four-year-olds studied heights of crawfish mounds and the length of yellow flower blossoms and petals. One student also described seeing a snake which provided the group with an opportunity to learn how to estimate the length of the snake from a distance. 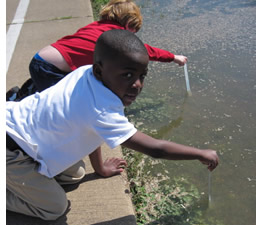 In addition to measuring different aspects of their environment using various tools, students took the time to observe the diverse plant life and various insects and to classify the animals they identified. Students studied flowers and described the types of ants that they discovered. With the help of a magnifying glass, they were able to study the different parts of an insect and some aspects of what makes it an insect. According to Ms. Stigall, "The students loved to study the anthills and by the end of the year, they were able to identify different types of ants."

Ms. Stigall went on to teach the students about the concept of evaporation and once this subject was introduced, it was easier for them to understand the formation of clouds and to identify the different types of clouds in the sky. According to Ms. Stigall, "The names of clouds and what they might mean became important to them and their discussions during daily walks." 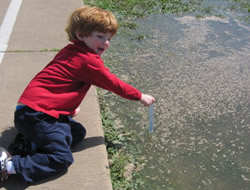 The group of four-year-old scientists presented their findings using songs, poems, illustrations, and movements. They also dictated their science stories and discoveries to other teachers in order to explain what they saw, felt, and learned about their world. This presentation led Ms. Stigall to the realization that the students were able to discuss what they learned in their environment, and they were able to recall and apply what they have learned in the past. Pre-K research activities at Phoenix Magnet School season the minds of young science students to learn through physical experience and pave the way for progressively intensive research throughout their academic careers.

Phoenix Magnet Elementary School has been with GLOBE since 1997 and has submitted GLOBE data on Cloud Observations, Solid and Rain Precipitation, and Air Temperature. Norma Stigall is the sole GLOBE Teacher at Phoenix Magnet and is currently the Pre-K Teacher. With the help of GLOBE Cooperating Organization National Geographic providing the resources and educational program at Lousiana State University, Ms. Stigall was able to become a National Geographic Teacher consultant.