Each year, at the OhioView Teachers Exploring Local Landscapes to Interpret the Earth from Space (SATELLITES) Conference, students from K-12 schools and universities from multiples states present projects that they developed using their own inquiry-based research utilizing geospatial technologies. Student projects are then evaluated for scientific quality and awards are presented to the highest scoring teams in elementary, middle, high school, and college. Each fall, the SATELLITES Program partners with GLOBE to hold a field campaign that allows students the opportunity to develop the projects they will present at the conference. The 2011 Surface Temperature Field Campaign is currently underway, and involves both U.S. and international GLOBE schools. 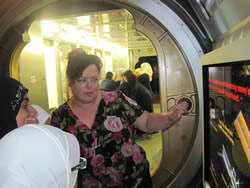 The 2011 event was held on 12 April at the Penta Career Center in Perrysburg, Ohio, and provided a particular opportunity for students from Oliver Wendell Holmes School to shine. This school is located in Southwest Detroit in a primarily low-income and culturally diverse district where students work hard in developing innovative science research projects in order to make a difference in their community. GLOBE teacher Connie Atkisson is OWH School's sole science teacher who encourages all her students to come up with their own inquiry-based science research projects and actively assists them when collecting data. Because of the school's strategic location near two major rivers, the Rouge and the Huron, these students utilize GLOBE Hydrology Protocols to test the water quality of the rivers and even in the community's drinking water.

For the past three years, GLOBE student Husiena has studied water quality and benthic indicator species in the Rouge River. Benthic macroinvertebrates are small invertebrates who inhabit the ecological benthic region at the bottom of a body of water. The existence and sustainability of these species can provide indicators of water quality. Husiena collected water data using GLOBE protocols for Water Transparency, Water Temperature, Dissolved Oxygen (both chemical testing and by meter), Electrical Conductivity, pH, Alkalinity, Nitrates, and Phosphates. She and Atkisson diligently tested benthic samples throughout the school year, even during the frigid winter months. Their samples and chemical test results allowed them to compare results to Japanese waters in the Shiga Prefecture during Michigan State University's Summer Environmental Studies program. Husiena also used her Rouge River research to monitor the building and developing of storm sewer systems. For three consecutive years, this student has won first place in the SATELLITES conferences.

Ms. Atkisson has also helped develop projects with four of Husiena's younger sisters, all of whom have participated in the SATELLITES conference. Her sister Sabrina used GLOBE Atmosphere Protocols to measure Surface Temperature, Air, and Soil Temperature up to four times per week during the winter months. With the assistance of Ms. Atkisson, both Husiena and Sabrina studied the effects of organic and nonorganic fertilization of farming on waterways in Northeast Ohio. The sisters worked together simultaneously, with one collecting and testing various rivers, farm ponds, and irrigation ditches while the other created filtering devices to determine the most effective method for removing water pollutants.

Saeda, another of Ms. Atkisson's students and sister to Husiena and Sabrina, won first place for two consecutive years in the Elementary K-6 division of the conference.  In conjunction with the International Polar Year (IPY), Saeda's first project required gathering sand samples from the Polar Regions (Alaska), the mid-latitudes (Michigan), and the equatorial regions (Mexico). The objective was to discover which sand composition would retain the most heat. Using GLOBE protocols to study Surface Temperature and Cloud Cover, she determined which sand type would 1) retain more heat at the given latitudes and 2) contribute to heating up the atmosphere. In another project, this student measured the temperature of refracted light bent in the three different regions mentioned earlier. The results of both projects identified whether sunlight intensity or its different colors contributed to climate change. 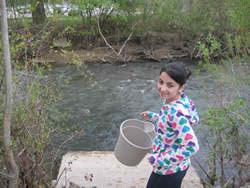 A fourth sister Suzan uses GLOBE Hydrology Protocols to test tap water in various communities in Southeastern Michigan to determine which ones are the safest for the residents to drink. Her research consists of data collected from Columbus, Cincinnati, Toledo, Cleveland (OH), and Chicago (Il), all the while using her Detroit data as a baseline for comparison. Finally, Sandy, the fifth sister, scrutinized top sunscreen brands in order to test their effectiveness in blocking UVA and UVB rays. Coating bracelets made out of UV pony beads with the various sunscreens, the student exposed them to sunlight and UV light to see which product actually lived up to its claim. 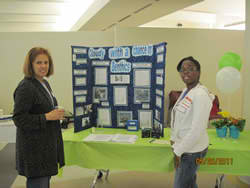 In the Junior 7-9 division of the SATELLITES Conference, two more of Ms. Atkisson's students won second and third places. Danielle collected water data from the Detroit and Rouge Rivers (Dissolved Oxygen, pH, Nitrates, Phosphates, Alkalinity, Electrical Conductivity, and Turbidity) to determine which one provided the healthiest environment for benthic indicator species, and Dania collected data from the Huron and Rouge Rivers in order to test the water quality. Osama, another elementary student, took a slightly different route and created a project to distinguish which automotive paints on vehicles retained more heat and which remained cool. Developed using a Fluke 63 Infrared thermometer and GLOBE Protocols for Atmosphere and Climate, Osama's projects won first place in the Elementary K-6 Division. Sandy, the last student to present at this year's conference, used Hydrology Protocols to test ten varieties of bottled water to determine which one was the healthiest for humans to drink. 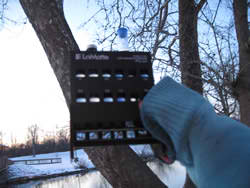 The research conducted by Ms. Atkisson's hardworking students through their projects has not only enriched their class experience but has also greatly affected their community. Over the last seven years, the students' data showed that the Rouge River only contains trace amounts of nitrates in the water. During one nitrate test, however, the students found that the water contained a high concentration of nitrates (turned neon pink). As good scientists, the students tested the water several times; the results of all still showed high nitrates concentration. Ms. Atkisson reported the anomaly to the Rouge Education Foundation, who sent the Wayne County experts to verify the data. After confirming the student's findings, they were able to prevent a potential water problem and accordingly thanked the students for being able to identify such an environmental problem.

Atkisson's students are greatly motivated by the SATELLITES Conference because they can see what other students are doing in the geosciences field as well as learn from scientists. Ms. Atkisson proudly expressed how "each of her students has plans to enter the STEM fields ranging from biomedical engineering, pharmacology, environmental research and environmental law." Many of these inner-city students come from families whose parents have not completed middle school, but that has not stopped these young scientists. With the help and encouragement of Ms. Atkisson, these students aim high, even sometimes calling her during school breaks to see if they can continue to collect data. Furthermore, "to hear my students discuss with experts in the field, their projects and their ideas, makes the many hours and financial sacrifice worth it," expresses Atkisson. She added, "These are amazing students, and I will do everything within my power to help them achieve their goals."

Read this GLOBE Star about GLOBE Students from Ohio who were invited to the White House to present their research from the 2010 SATELLITES Conference.