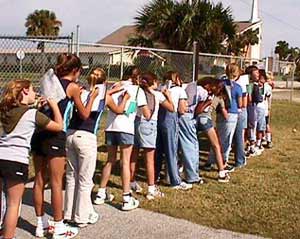 A GLOBE school in Florida is proving that elementary students can play a critical role in providing data for both local and national scientific purposes. Data from Indialantic Elementary are being used by a local television meteorologists and by scientists at the National Climatic Data Center in North Carolina. 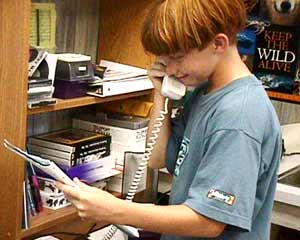 "As a meteorologist in Central Florida, I look at data from all over the country to make my weather forecasts," WESH-TV meteorologist Brad Nitz reported. "WESH-TV has access to all NOAA, NWS, and FAA data. But often the most important information for me and my viewers comes from weather data collected right here in central Florida. The GLOBE students have been a reliable source for weather data. I appreciate the students of Indialantic Elementary for helping me provide the best information possible to my viewers."

Each day, students in GLOBE Teacher Libby Helseth's class take turns calling their observations into the station. "The kids are very good at meteorology. They're taking this very seriously," Ms. Helseth says. "They're doing it willingly, and they want to expand into hydrology."

In mid October, Hurricane Irene bore down on the Southeastern United States, showering the state of Florida with high levels of precipitation. In an effort to establish the full extent of Hurricane Irene's effects, officials at the National Climatic Data Center (NCDC) are combining precipitation data reported by Indialantic Elementary and other area GLOBE schools with National Weather Service data from observation stations throughout the state.

"With the help of the GLOBE student data, we were able to conclude that the southwestern region of the state was the most severely impacted," explained Wayne Faas, an atmospheric scientist at NCDC. "Monitoring the impacts of hurricanes in this way is critical to our ability to make future predictions and to help local citizens to anticipate the possible effects of severe weather."