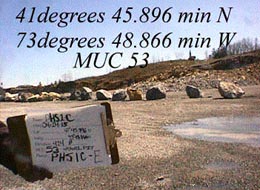 From the stately halls of the United Nations Building in downtown New York City to the backwoods of rural New York State, GLOBE Teachers Patsy Cicala and Wayne Gilchrest are working with hundreds of students to expand global and local knowledge about the Earth's environment.

Schools from Pawling to New Paltz, from Millbrook to Wappingers Falls, covered an area of 545 square miles. They snapped over 240 pictures and entered over 640 data points to the GLOBE Student Data Archive. Scientists at the University of New Hampshire will be using the photographs and data to help improve their interpretations of satellite imagery.