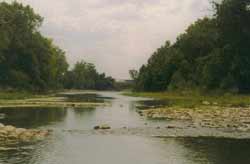 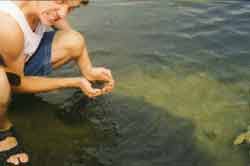 After five years of participation in GLOBE, students at New Miami Junior/Senior High are significantly contributing to scientific research and improving their test scores at the same time! School officials report that nearly three-quarters of the students who participated in GLOBE either in seventh or eighth grade passed the Ohio science proficiency exam. Among kids who had never had GLOBE, fewer than half passed.

Officials at New Miami also report that many students involved in the GLOBE Program are opting to take more science classes than those who don't participate in GLOBE. The school, which has been active in GLOBE for five years, has added more science electives as a result. "For a while it was normal around here to take as few science classes as possible," says GLOBE Teacher and Teacher-Trainer Larry Thomas. "But kids who've gone through GLOBE are taking three and four years of science."

These higher levels of interest and proficiency in science are reflected in many ways, Mr. Thomas says. Recently a few students were exploring Four Mile Creek, the watershed classes use for GLOBE hydrology measurements. Students Felicae McBee, Chris Hubbard and Matt Dawson found heavy deposits of black water around an oil pipe and called the Ohio Environmental Protection Agency to have the sludge investigated. "These kids were not drawn to science before," Mr. Thomas said. "Now they are doing science on their own time."

Officials from the Ohio EPA were impressed with the students' scientific approach and tested the sludge, determining that it was an organic matter. "We had a meeting and the adults stayed out of it," says Dale B. Farmer, Ohio EPA On-Scene Coordinator, Emergency Response Section. "The kids asked good questions about what it could be besides the oil pipe. They asked about fertilizer and sewer discharge. They could have been right about the fertilizer because it can cause an algae bloom."

"Very often, when there's something like an oil pipeline involved, people make up their minds about what is causing black water or sludge and just want something to be done about it," Mr. Farmer adds. "These kids had open minds and were willing to follow through and find out what was causing this substance to form."