If you were driving across the southern tier of the United States recently, you might have seen a young couple on a bright red bicycle built for two festooned with yellow gear bags peddling from Santa Barbara, California to Arlington, Virginia.

What you wouldn't know from the unusual sight is that Chris Pyke and Britta Bierwagen are conservation biologists and enthusiasts of The GLOBE Program who visited more than 40 GLOBE schools and spoke to more than 5,000 students on their 3,000 mile, two-month trek. They taught students about the biology of rare and endangered species in their local communities, showed them the tools and techniques of conservation biology and put human faces on the concept of scientist. 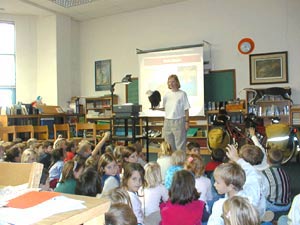 "From a GLOBE point of view, students and teachers are doing a lot of science but they don't get to see a scientist very often. That was meaningful to them," Chris said recently at Jamestown Elementary School in Arlington during a break from presenting an educational summary of the trip to about 560 elementary students. 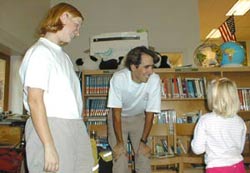 "People think scientists just come in white lab coats. This whole project makes it more human, shows there are real people underneath. This makes us more acceptable," added Britta. "And we arrive in such a peculiar fashion, the lesson sticks a bit more." 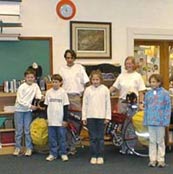 They geared their presentations to the students' levels and localized the animals and plants they spoke about. For example, Chris pointed out that big cats including Mountain Lions, Cougars and the Florida Panther used to roam much of the United States. Britta pointed to the resurgence of the American Bald Eagle - there are nearly 6,000 pairs now as compared to less than 500 in the 1970's - as a conservation biology success story.

"Chris and Britta's journey was a nice reality check because children were able to see that they could make a difference in the world," said Nicki Smith, the principal of Jamestown Elementary School.

For Benita Flores' class at Wainwright Elementary School in El Paso, Texas the duo's lessons had an immediate impact, a lasting effect and quite possibly an inspiration of goals to strive for.

"My students were so excited to hear Britta and Chris speaking. They were very impressed to see that they travel everywhere by bicycle," Flores said of the autumn visit. "The presentation kept their interest and they had many questions for the couple. The students learned about many endangered species and how they can care for their environment.

"The presentation has opened their eyes to the fact that they can be aware of and help the environment around them," Flores added.. "Even though they can't bicycle around the country -- at least not yet -- they are doing things to help and protect what is around them now."

Britta, a program coordinator at the National Center for Ecological Synthesis and Analysis, is pursuing her Ph. D. in conservation Biology at the Donald Bren School of Environmental Science and Management at the University of California, Santa Barbara. Chris, an instructor with the National Outdoor Leadership School, is a UCSB Ph. D. candidate in geography with focus on wetlands ecology, geographic information systems and conservation planning.